How the factories have fared over the opening 10 rounds of 2020.

With 10 rounds complete and an indefinite break in the schedule before we commence the final seven stops, we break down the 450SX performances of the factory teams filling the gates of the 2020 Monster Energy Supercross and rate their form to date. 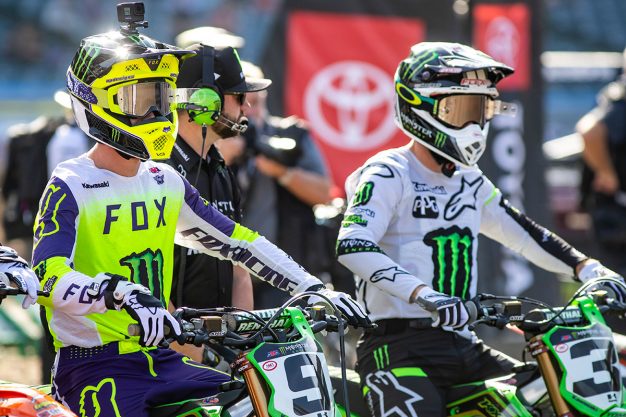 Team: Monster Energy Kawasaki
Riders: Eli Tomac and Adam Cianciarulo
Rating: A
Rundown: The Monster Energy Kawasaki camp has plenty to smile about right now. Their number one rider Eli Tomac holds the red plate and, with five round wins next to his name, he’s also the most successful. It was a relatively slow start for Tomac with a seventh at Anaheim 1, but since then he hasn’t finished below fourth. Consistency wins championships and if he keeps up this form he’ll be the favourite for the title. Meanwhile, 450SX class rookie Adam Cianciarulo showed tonnes of promise before breaking his collarbone during qualifying at Arlington. At the time he sat fifth in the points and had two second-place results to his name – against such a deep field that’s a testament to his potential and form.

Team: Team Honda HRC
Riders: Ken Roczen and Justin Brayton
Rating: A-
Rundown: Team Honda HRC certainly won’t be complaining with how their riders have performed so far in 2020. With Ken Roczen chalking up three wins and having his hands on the red plate twice, this is the closest they’ve been to the 450SX championship since Ricky Carmichael last claimed the title for them in 2003! Roczen broke his three-year winless streak at St Louis and has won both Triple Crown rounds so far. The experienced Justin Brayton has been in decent form since joining the HRC, currently eighth in the championship standings, but was hindered by a crash-marred outing at the Arlington Triple Crown round. Still, he’s placed inside the top 10 on seven occasions, including an impressive sixth at Glendale.

Team: Red Bull KTM Factory Racing
Rider: Cooper Webb
Rating: A-
Rundown: With the defending champion Cooper Webb and serious contender Marvin Musquin returning to Red Bull KTM this year, the team had a very real chance of having both riders on the podium, but it wasn’t to be, with Musquin suffering a knee injury before the series even got going. Webb has been more than holding his own though, with a round win at San Diego and a 70 per cent podium appearance rate. He’s done it the hard way too – he battled a horrendous flu for the first two rounds (finishing third and 12th), then rebounded from a spectacular crash at Arlington to place third a week later in Atlanta. If Webb, who’s currently third in the championship, can defend his title, it’ll be one of the gutsiest performances we’ve seen in a long time. 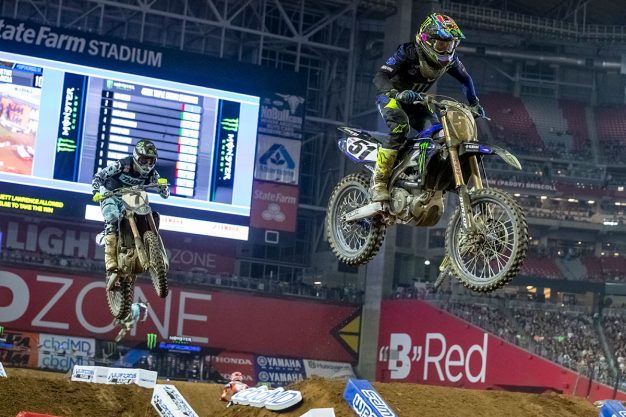 Team: Monster Energy Yamaha Factory Racing
Riders: Justin Barcia and Aaron Plessinger
Rating: B
Rundown: The factory Yamaha camp has experienced a bit of a roller-coaster so far in 2020. The year started strongly as Justin Barcia stormed to the opening round win at Anaheim 1, then backed it up with a second at St Louis. Since then his consistent results (his worst is a ninth) have certainly helped cement him firmly in fourth place, currently just two points behind Webb. At the other end of the spectrum, Aaron Plessinger’s results have been more misses than hits. Currently sitting 11th in the championship, his results have swung from a season-best sixth at the chopped-up Daytona circuit through to a 16th just three weeks prior at Tampa. There’s little question Plessinger has raw speed and talent, but his struggle with consistency is hurting his 2020 campaign.

Team: Rockstar Energy Husqvarna Factory Racing
Riders: Jason Anderson, Dean Wilson and Zach Osborne
Rating: B-
Rundown: It’s been a fairly subdued year for the Rockstar Husky team. Former 450SX champion Jason Anderson has been a quiet achiever so far, going about his business and without fuss with two podiums and seven top-five results. His lowest result – 10th place at Tampa – came courtesy of a track-cutting penalty after a scrap with Malcolm Stewart, but he’s still sitting fifth in the title chase. Anderson’s teammate Dean Wilson is currently placed ninth in the championship with a mixed bag of results that have so far peaked with a sixth at Tampa. Meanwhile, Zach Osborne’s results had been an even wilder ride before he suffered a mammoth practice crash that forced him to the sidelines. A hard-fought fourth place at Anaheim 2 was countered out with DNF and a DNS during the Glendale Triple Crown round.

Team: JGRMX Yoshimura Suzuki Factory Racing
Riders: Joey Savatgy, Fredrik Noren, Broc Tickle and Jimmy Decotis
Rating: D
Rundown: You can sum up 2020 in four words for the JGRMX squad – a season to forget. Nothing the 450SX team has done has gone to plan. Before the championship even started they lost their new recruit Joey Savatgy with a broken heel in Australia. At Anaheim 1, Jimmy Decotis crashed out of the main on the opening lap, while Swedish import Fredrik Noren struggled to a 21st position. A week later in St Louis, Decotis circulated to 20th place, while Noren overshot a triple in his heat race and broke his leg. The JGR team then brought in Broc Tickle, who was returning from his lengthy suspension and he rewarded them with a solid 12th at Tampa before a breaking his hand when he collided with another rider early in the opening Triple Crown race at Arlington. It’s been a brutal year so far, but, assuming they get through the Lucas Oil Pro Motocross Championship cleanly, their riders should be fit and ready for a reinvigorated push towards Salt Lake City.