In this edition of Rewind, we reflect on Cooper Webb emerging as a title contender in the 2019 Monster Energy Supercross series before ultimately being crowned champion.

Making his debut with Red Bull KTM Factory Racing, Webb started the season strongly at A1 with a respectable fourth place finish, although one week later in Glendale, the best he could muster up was 10th – leaving many to believe it was the same Cooper Webb from his first two years in the premier class. The number two rose to the occasion though when series returned to Anaheim, notching his first-ever 450SX main event win, only to back it up the following weekend with another victory in Oakland.

San Diego saw Webb’s winning run end with an eighth, but what he delivered next was what established him as the title favourite, recording 1-1-2-1-2-3 results across the next six weekends to make himself the man to beat.

From there, he managed the title through to Vegas, securing two wins and three podiums from the final six rounds to clinch the title by 18 points over Eli Tomac (Monster Energy Kawasaki).

“It’s been an incredible journey,” Webb reflected. “This KTM team believed in me, they took me in and transformed me back to where I always knew I could be. 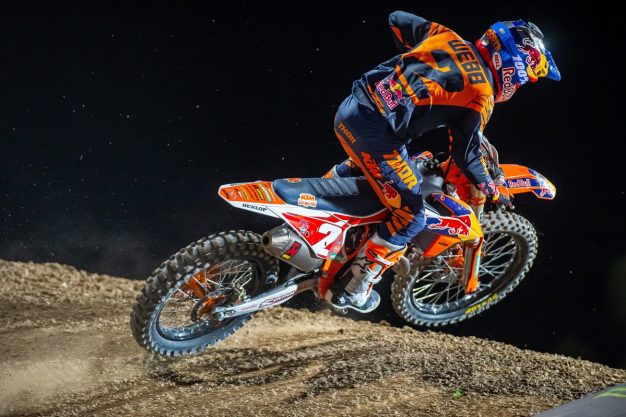 “This year was not expected at all and I can’t thank them enough for giving me this opportunity to get back into this level and to do it this way is unreal. It’s a dream come true, I’ve had it since I was a little kid. It’s an incredible feeling.”

As it stands with the 2020 Supercross season hold due to the coronavirus, Webb sits third in the rankings following 10 rounds in the championship.