Answering questions on the effects of COVID-19 on Supercross.

In this instalment of Q&A, we look at the impact coronavirus is having on the 2020 Monster Energy Supercross series. 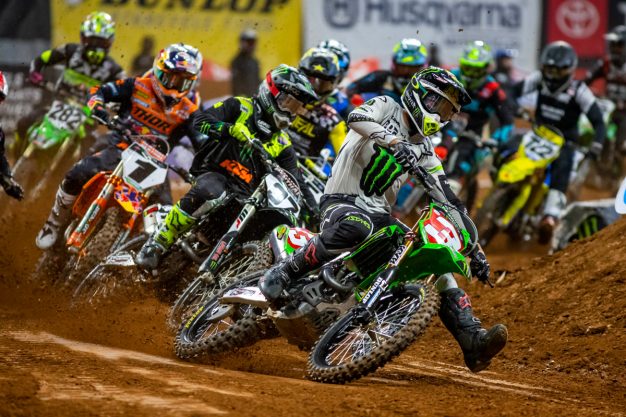 Q: Have any events been postponed or cancelled?

A: At this stage, this weekend’s stop in Indianapolis and the 13th round in Seattle at the end of the month have been cancelled. Both come after their respective states put a ban on large-scale events, which includes Supercross. It’s understood the Seattle round will be rescheduled and take place elsewhere, but with more changes in the calendar on the horizon, it’s unclear if that’s the still the situation.

Q: Ken Roczen cancelled his signings with fans, has anyone else joined him?

A: The Team Honda HRC rider announced earlier this week that he’s cancelling all of his meet and greets with fans, and he’s since been joined by manufacturers Yamaha, Honda and Kawasaki in abandoning all autograph sessions. It comes in an effort to protect the health of their riders and crew. Q: Will any more events be affected?

A: It’s very likely more events will be cancelled or postponed, with reports already suggesting next week’s stop in Detroit has also been cancelled. Whether it’s the last see of Supercross is yet to be determined, but we can definitely expect more cancellations to be made in the coming days and weeks.

Q: Will the cancelled races be rescheduled?

A: With more events being cancelled, it’s likely we won’t see them rescheduled due to the packed schedule and looming Pro Motocross series, which could also be impacted by the ongoing restrictions on events due to coronavirus. With two events already on the list, there simply isn’t enough time to before the outdoors to continually reschedule, meaning it’s likely we’ll see a shortened championship.

Q: What’s the situation in other sports?

A: Both the NBA and NFL have suspended their seasons indefinitely, while in the motorcycle world, the MXGP World Championship has rescheduled a number of events to the end of the year, as has MotoGP and WorldSBK.