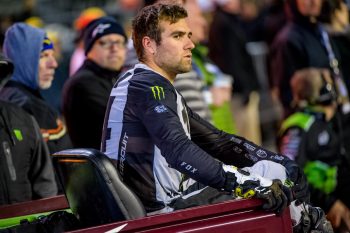 The number 54, who claimed second in his heat, collided with another rider during the early stages, going down and injuring his knee, prompting him to call it a night.

“Well sometimes it just seems that you can’t get momentum swaying in your direction,” Smith stated. “That’s definitely how I feel right now. As most of you could see last night I twisted my knee pretty bad. I will get an MRI tomorrow and keep everyone updated on my status.”

Smith will be in a race against time as Indianapolis’ stop of Monster Energy Supercross looms this weekend. His teammate, Garrett Marchbanks, went onto claim career-first win on Saturday in the 14-lap affair.