Assorted racer comments following the 10th round of Supercross.

In Quotebook, a selection of riders detail round 10 of the 2020 Monster Energy Supercross, an FIM World Championship, at Daytona. 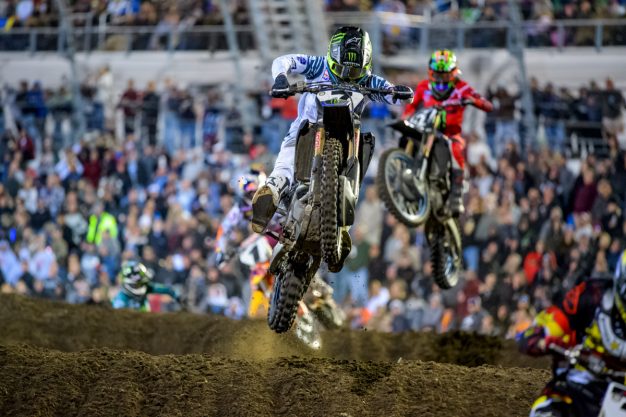 Cooper Webb (Red Bull KTM Factory Racing) – Third:
I felt like I put myself in a good position – I was in second and a little way back and Eli [Tomac] was able to get me. I started making a lot of mistakes and let him get away. It’s good to be on the podium, so I’m stoked on that but I’m going to work this week. I think I’m at a point where I’ve finally healed up good enough to try to contend, so I’ll take the podium but I really want to get another win.

Jason Anderson (Rockstar Energy Husqvarna Factory Racing) – Fourth:
My weekend went alright. The heat race went well, I almost got into the lead there but I ended up finishing second. In the main, I got the holeshot and fell back to fourth but I pushed forward and almost had third. All-in-all it was a good race for me and I just have to keep racing out there with the boys.

Dean Wilson (Rockstar Energy Husqvarna Factory Racing) – Seventh:
In the main event, I knew the start was very crucial so I put a lot of focus into that and I had a decent start but I got a little tight at the beginning. About midway through, I started finding lines and getting close to the top-five but I just wasn’t able to make it happen. I’m frustrated with not being in the top-five but I’m happy with my riding progress and I feel like my confidence is coming back so every weekend I’m getting a lot better.

Justin Barcia (Monster Energy Yamaha Factory Racing) – Fifth:
I felt like I should have had a stronger result, but there were some positives to take from tonight. My starts were much better, so that was a good thing. We just struggled with setup all day. We were trying to adapt to the track and find that happy place, I just never found it. I rode well in my Heat race. The track was pretty smooth, but in the Main Event the track roughened up and I was just a little bit uncomfortable. Aaron and I battled for a while. It was a fun race, but I expected a lot more of myself. I felt like I should have had a better result, but we have to take the positives. I had good starts and qualified pretty well today, which was something that has hurt us. So we’re going to take the positives moving into next weekend at Indy and get back on top.

Aaron Plessinger (Monster Energy Yamaha Factory Racing) – Sixth:
The night was great. I got off to a really great start in the Heat race. I held Kenny (Roczen) off for a couple laps, but he got by me. Then Barcia and I were going at it for a little bit but I was able to hold him off and finish second. I got off to another great start in the Main, but then a few guys got by me. I held the pace for a little bit, but it was gnarly out there! It was rough, rutted, and sandy. I almost fell down a couple times and got head shake a couple times as well. It definitely holds up to its name of being the toughest supercross race. Barcia got me with a few laps to go and I finished sixth. We’re making strides towards the front. I finished up eighth two weeks ago, seventh last weekend, and now sixth. I’m just plugging away. The bike’s coming together really nice. I think before we know it we’ll be up on the podium.

Eli Tomac (Monster Energy Kawasaki) – First:
I’ve always loved racing at Daytona – I have fun out here and it’s special having the fans so close and loud by the track. I had a positive attitude all day and just kept that energy rolling into the night show. Truthfully, I really thought it was a long shot to win the main as I was riding around sixth in the first lap with some tough contenders in front of me. I had some good momentum in the sand and a few other sections though, so I was able to put in some solid laps and begin making moves, giving it everything I had.

Ken Roczen (Team Honda HRC) – Second:
Tonight went well and I’m happy to come away with a second. My starts have been really good lately, and that continued today in both the heat and the main. When I got out front, I knew I needed to try and lay down some good laps to get a cushion. In the middle of the race I kind of switched up my lines a little, and it didn’t work too well. Eli was coming quick and closed in on me. I made a mistake and tipped over in a turn, which cost me the lead. Even after that happened, it was important for me not to give up and stay right behind him. We were putting down a good pace at the end there, and I think if I had another lap, I could’ve tried to battle back for the lead. I tried my hardest though, and in the end, it wasn’t good enough for a win. I’m really happy with the consistency that we’re bringing every weekend, and with my starts and overall riding. We’re still in a good position for the rest of the season.

Justin Brayton (Team Honda HRC) – 10th:
I’m pretty disappointed; it doesn’t seem like I can catch a break, honestly. I got an okay start but was shuffled around on the first lap and came around in about 10th. I wasn’t able to make the moves I needed to and was back in the chaos. On the final lap, I was completely taken down by Vince [Friese].

Charles Lefrancois (JGRMX Yoshimura Suzuki Racing) – DNQ:
I felt comfortable on the bike from the start of timed practice. I managed to get the 19th fastest time in the first timed session and qualified 22nd overall after the second session. I knew a direct transfer into the Main was possible for me with a good start, and usually starts are my strength, but not tonight. I worked hard to make passes, but it was not enough in my heat or the LCQ to transfer to the Main. Despite my bad result I really liked the bike, and also the track, and will work hard this week to get better results in Indy. 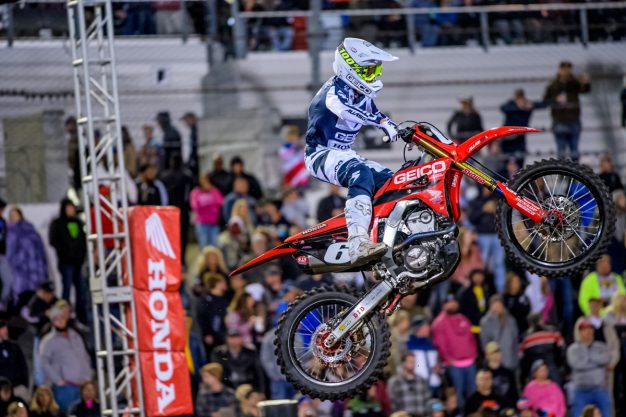 Shane McElrath (Monster Energy Star Yamaha Racing) – Fifth:
I felt great all day and had a great night going! I got together with another rider early on and we both ended up going down. I was pushing hard to come back and catch the lead group and then I ended up going down again. I’m happy with my riding, just sometimes things don’t go your way. We will be back!

Garrett Marchbanks (Monster Energy Pro Circuit Kawasaki) – First:
I’m on cloud nine right now. I’ve thought about this for a long time – what it would be like to win – and it’s better than I could have imagined. It’s especially cool to get a win at Daytona. It’s such a historic race. I’m thankful that the team has been so supportive and knew I had what it takes. I finally got a great start and can’t believe we went wire-to-wire.

Chase Sexton (Geico Honda) – Second:
Never pleased to finish second, but overall I was struggling pretty much all day, just with bike setup and not really feeling comfortable with the track. It was more outdoorsy than I really expected. On a supercross setup we just didn’t really feel comfortable. Just kind of struggled. In the heat race I had a crash, ran over a rider and then got back to third. I really felt like I rode pretty well. For the main event, that put me in not a very good spot on the gate. I was pretty far outside. Just tried to give the best effort I could and got into the corner first, but I went too far wide. Made a few quick passes. Garrett was out front. I knew he was going to be tough to beat. He was riding good all day. I put my head down and tried to close the gap a little bit, but overall he was riding really well. I can’t take anything away from him. I just didn’t have it tonight. Going back into Indianapolis, my home race, with an extended points lead feels good.”

Jeremy Martin (Geico Honda) – Third:
Man it felt so good to be pinning it on my GEICO Honda at the Daytona International Speedway. The speed was there all day to grab a win but I couldn’t get out of the gate in the main event. I wheelied off the start and lost some ground. I ended up going off the track in the sand section on lap one due to Jordan Smith having a crash. I blew off the track and had to jump some tough blocks. Put on a massive charge to get back onto the box for third overall. Definitely disappointed with my performance.

Jo Shimoda (Geico Honda) – Seventh:
The whole practice, in timed qualifying, I didn’t get in good laps, but I felt loose all day. I was a little bit tight in the beginning of my heat but got fourth. In the main event I started okay but [Shane] McElrath crashed in front of me and I got stuck behind him which put me behind a lot of riders. I was able to get to seventh and I was catching up to sixth, but then I went off the track with three laps to go. Had to settle for seventh.

RJ Hampshire (Rockstar Energy Husqvarna Factory Racing) – Fourth:
Obviously I would have liked to finish on the podium but all-in-all, I’m pretty happy with how tonight went. While I was running third, I dabbed my leg in a corner and it gave me a stinger on my knee, which kind of caused me to mess up the rhythm a couple of laps and [Jeremy] Martin was able to get around me. With the track being as high-speed as it was, I made the decision to be smart and take fourth so I could move on to Indy and get better results.

Jalek Swoll (Rockstar Energy Husqvarna Factory Racing) – Ninth:
Honestly, the start of the day didn’t go too well but once the night show came around I actually felt really good on the bike and all the struggles I had in the beginning of the day went away. I actually I think the LCQ helped me a little bit – I got more time on the track and more time on the sand tire, so it was good. I was happy with my speed tonight and I feel like I was catching the guys in front of me but I had some mistakes that kept me from breaking into that group ahead.