Daytona’s 10th round of Monster Energy Supercross saw Eli Tomac secure a thrilling victory – his fourth at the venue. In this edition of Debrief, the Monster Energy Kawasaki rider recounts his triumph with questions from the post-race press conference. 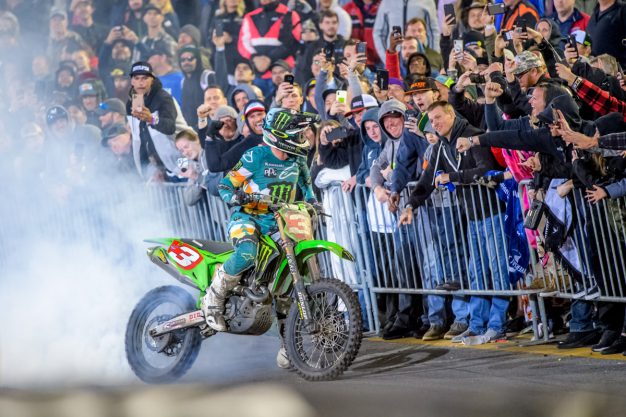 I thought it was a far-shot [getting Ken Roczen] – I looked up and saw him out front, and I thought gosh damn it. It was tough tonight to make up the time – it really just ended up being in the sand and having good momentum. I had another good line through the option lane, but there was a lot of single-file in a lot of areas. I was able to capitalise on some mistakes, and I think that’s what got me to the top.

Talk about the success you’ve been able to get here…

It’s hard to put my finger on what it is other than just enjoying the track – I guess that is it. Having a positive mindset coming into the race, and I’ve always enjoyed the looser surface. A little bit of that, a little bit of this – this is our fourth one, it’s pretty cool.

At the start, how did you get stuck behind in the pack?

I chose the second gate – there were some decent starts out of there in the heats and LCQ, but you know, I was shuffled back a little bit. Either way, it still came out wherever I was – probably sixth or something. It wasn’t terrible, and it wasn’t the best. That’s where I was at, and then I had all the really fast guys in front of me – I was like ‘this is going to be a long main’. 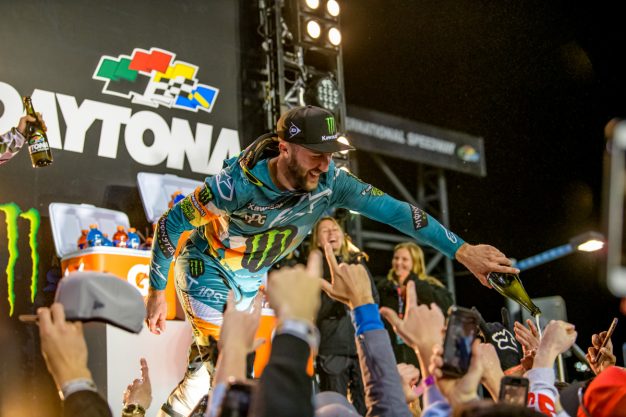 At one point you were eight seconds behind Ken, did the team communicate that with you or did you realise that you needed to pick it up?

You know, I probably only look at the pit board four or five times a race. I just focus and try to do my thing. Really, I was just marking Ken on the track, and that’s all you can do at that point. This track is long that you can get it done, you just have to be patient.

You had you best lap with five minutes to go – which is crazy – but we’ve seen you do that kind of thing before. Is that something that just happens in a race situation – do you do that at home, or is it only something that happens when it’s all on the line?

Yeah, I’m going for the lead, and at that point, I probably had clean air – I wasn’t following anyone. When you’re in sixth, you’re always behind a guy and a lot of times you don’t get that really good lap in. Towards the end, I had some clean air to make that big push.

The track is obviously brutal, how much of it is just physical down the stretch?

This place, you kind of just have to relax. To be honest, I liked it when it was the 20 laps or a little bit longer. 18 laps feels kind of short because you’re used to doing 26-27 laps in the stadium environment.

Daytona is unique where the fans get to come out to the podium, watching you interact with them, it seems like that really pumped you up…

It’s cool, I mean it’s always easy to be pumped when you win the race. Having everyone there, it’s pretty neat. They’re right there in the side of the track all the way up to the podium, that’s cool for everyone.