Factory Yamaha pilot salvages fifth at the 10th round. 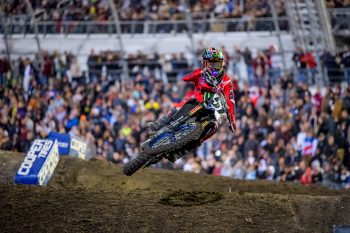 Justin Barcia admits he expected more from himself at Daytona’s 10th round of Monster Energy Supercross after completing the main event in fifth position.

The Monster Energy Yamaha Factory Racing rider indicated he struggled with bike set-up as conditions roughened up, making him ‘a little bit uncomfortable’ in the 18-lap final.

“I felt like I should have had a stronger result, but there were some positives to take from tonight,” Barcia stated. “My starts were much better, so that was a good thing. We just struggled with setup all day. We were trying to adapt to the track and find that happy place, I just never found it.

“I rode well in my heat race. The track was pretty smooth, but in the main event the track roughened up and I was just a little bit uncomfortable. Aaron and I battled for a while. It was a fun race, but I expected a lot more of myself.

Barica sits fourth in the standings as the series heads to Indianapolis this weekend.