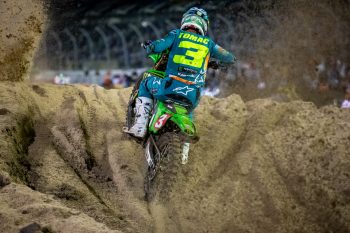 The Monster Energy Kawasaki rider put on a stunning display during Saturday night’s 10th round, coming from deep in the field to overcome Roczen in the dying laps, earning his fourth Daytona victory by a mere 0.707s.

Speaking at the post-race press conference, Tomac expressed he was in favour of the former 20-lap main event as opposed to 20 minutes plus one lap, which saw just 18 laps completed as opposed to 25-plus laps at traditional venues.

“To be honest, I liked it when it was the 20 laps or a little bit longer,” Tomac stated. “18 laps feels kind of short because you’re used to doing 26-27 laps in the stadium environment. I thought it was a far-shot [getting Ken Roczen] – I looked up and saw him out front, and I thought gosh damn it.

“It was tough tonight to make up the time – it really just ended up being in the sand and having good momentum. I had another good line through the option lane, but there was a lot of single-file in a lot of errors. I was able to capitalise on some mistakes, and I think that’s what got me to the top.”

Entering the round tied on points with Roczen, Tomac now leads the German by three as the series heads to Lucas Oil Stadium in Indianapolis this weekend.