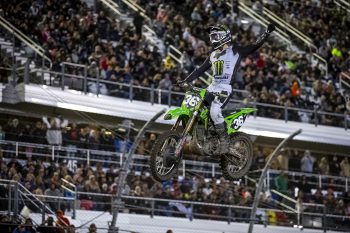 Monster Energy Pro Circuit Kawasaki’s Garrett Marchbanks celebrated a night of firsts as he earned his first career heat race win on the way to his first-ever main event win at Daytona International Speedway. The Utah native became the first racer from his home state to take a supercross win. Teammate Jordon Smith was following right behind his teammate in the main event before going down and was forced to retire early.

It was a night to remember for Marchbanks, who continued to show speed in his sophomore supercross season. It all paid off at the historic 50th running of the Daytona Supercross, where he not only took his first-ever career main event win but started the night off with a heat race win.

When the gate dropped for the main event, it was Marchbanks on his KX250 leading the way and grabbing the holeshot. He immediately put in several fast laps that helped him enjoy a cushion over second place. Every push made by the riders behind him was met with Marchbanks matching pace, proving he was capable of handling the pressure that comes with leading races. With his win, Marchbanks maintains his fourth-place spot in the championship standings, now just one point out of third.

“I’m on cloud nine right now,” said Marchbanks. “I’ve thought about this for a long time – what it would be like to win – and it’s better than I could have imagined. It’s especially cool to get a win at Daytona. It’s such a historic race. I’m thankful that the team has been so supportive and knew I had what it takes. I finally got a great start and can’t believe we went wire-to-wire.”

The day started out well for Smith who qualified sixth and went on to finish second in his heat race. In the main event, Smith tucked in right behind Marchbanks on the start at the front. A few corners later, he collided with another rider, going down and tweaking his knee. Smith was forced to call it a night, but is hopeful the tweak isn’t serious and will be evaluated this week.