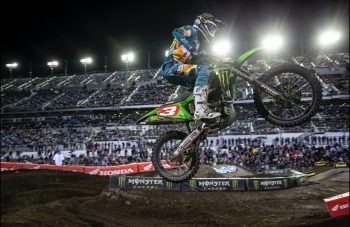 Round 10 of the Monster Energy® AMA Supercross, an FIM World Championship arrived at Daytona International Speedway for the 50th Anniversary of the Daytona Supercross where Kawasaki showed championship character to sweep both class wins for the second year in a row. Monster Energy Kawasaki’s Eli Tomac came from behind to overcome his championship rivals and extend his points lead, while Monster Energy®/Pro Circuit/Kawasaki’s Garrett Marchbanks captured this first career 250SX win.
Tomac kicked off the 50th running of the Daytona Supercross with top speed in qualifying posting a fastest lap time of 1:09.3 in the 450SX class, earning his second pole position of the season.

450SX Heat 2 saw Tomac in third out of the gate, where he battled for the lead as well as battling the challenging track and would go on to finish in third.

In the 450SX Main Event, Tomac found himself in sixth position as the field rounded the unique first corner and quickly went to work to maneuver his way to the front. Tomac made his way up to third at the halfway point of the race and began throwing down heater laps more than a second faster than his competitors to gain on the front-runners quickly. Once on the rear wheel of the leader, the feared No.3 KX™450 pressured his championship rival into a mistake and took the lead with less than two minutes remaining and secured his fifth win of the season.

Now in the lead for the 450SX championship point standings, Tomac takes back sole possession of the coveted red plate heading to Indianapolis next weekend.

The technical, elongated track along with unusual chilly weather in the “Sunshine State” couldn’t stop Kawasaki’s Daytona dominance, as Tomac became one of only three riders to have four career wins at the iconic Speedway.

“I’ve always loved racing at Daytona; I have fun out here and it’s special having the fans so close and loud by the track. I had a positive attitude all day and just kept that energy rolling into the night show. Truthfully, I really thought it was a long shot to win the main as I was riding around sixth in the first lap with some tough contenders in front of me. I had some good momentum in the sand and a few other sections though, so I was able to put in some solid laps and begin making moves, giving it everything I had.”