Webb inches his way back into title contention at Daytona 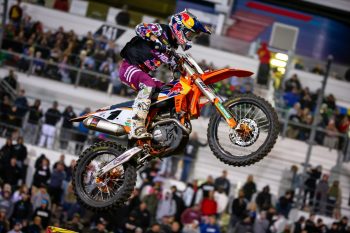 It was a solid night for Cooper Webb and the Red Bull KTM Factory Racing Team as they raced their way to a podium finish at Saturday’s Daytona Supercross for Round 10 of the 2020 AMA Supercross Championship. With his second-straight podium finish, Webb has moved into third overall in the 450SX Championship with nine rounds remaining in the season.

It’s been a tough start for the reigning 450SX Champion, who battled sickness early in his title defense and just as he began to hit his stride halfway through the season he suffered a hard crash in Texas that left him bruised and a little broken the last two rounds. He was able to bounce back in Daytona, though, kicking off the day with a third-place qualifying position inside the world-renown Daytona International Speedway.

Lining up in 450SX Heat 2, Webb got off to a second-place jump and he quickly powered his KTM 450 SX-F FACTORY EDITION to the lead on the opening lap. With two riders pressuring him from behind, Webb held strong to capture his first heat race victory of the season as he carried a favorable gate pick into the Main Event. In the main, he grabbed a top-five start and raced his way into third by lap three. Determined to reach the lead battle, Webb diligently climbed into second, setting his sights on the leader ahead. He made a couple of mistakes and lost the second-place spot with six laps to go, but he maintained a solid pace in the final laps to secure his seventh podium finish of the season with third.

Webb: “I felt like I put myself in a good position – I was in second and a little way back and Eli [Tomac] was able to get me. I started making a lot of mistakes and let him get away. It’s good to be on the podium, so I’m stoked on that but I’m going to work this week. I think I’m at a point where I’ve finally healed up good enough to try to contend, so I’ll take the podium but I really want to get another win.”