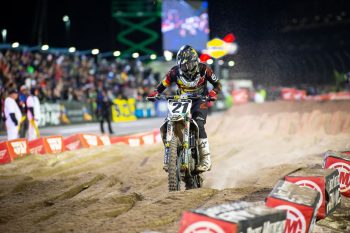 Round 10 of the 2020 AMA Supercross World Championship Series made its way to the world-renown Daytona International Speedway on Saturday for perhaps the roughest and most enduring stop on the 17-round circuit. The Rockstar Energy Husqvarna Factory Racing Team rose to the challenge with 450SX rider Jason Anderson finishing just off the podium in fourth, while Florida native RJ Hampshire fought his way to a fourth-place finish in the 250SX East division in front of a home-state crowd.

450SX
Anderson kept himself in the mix all day, beginning with a solid top-five qualifying position. He got off to a great start in 450SX Heat 2 where he made his way into second early on the opening lap. He put forth a great ride to ultimately secure a second-place transfer in the Main Event. In the main, Anderson shot off the line to capture the holeshot as he battled for the lead early on the opening lap. He continued to charge from the second-place spot early on, dicing for a podium position in the first half of the race. He dropped to fourth on lap 11 and from there he put on a charge to finish less than one second off the podium in fourth.

“My weekend went alright,” Anderson said. “The heat race went well, I almost got into the lead there but I ended up finishing second. In the main, I got the holeshot and fell back to fourth but I pushed forward and almost had third. All-in-all it, was a good race for me and I just have to keep racing out there with the boys.”

It was a good night for Dean Wilson, who secured his second-best finish of the season at Round 10. Wilson, the seventh-place qualifier, grabbed a good start in 450SX Heat 2 but he unfortunately landed on another rider in an unavoidable collision, which forced him to come from behind early on. Wilson was able to salvage the race as he battled his way to a sixth-place transfer. In the Main Event, he got off to a seventh-place start and he maintained a steady seventh throughout the 18-lap Main Event. After 10 rounds, Wilson has climbed up one spot to ninth in the 450SX Championship Standings.

“In the Main Event, I knew the start was very crucial so I put a lot of focus into that and I had a decent start but I got a little tight at the beginning,” Wilson said. “About midway through, I started finding lines and getting close to the top-five but I just wasn’t able to make it happen. I’m frustrated with not being in the top-five but I’m happy with my riding progress and I feel like my confidence is coming back so every weekend I’m getting a lot better.”

Rockstar Energy Husqvarna Factory Racing’s Zach Osborne missed Round 10 due to injuries sustained during a practice crash before the Atlanta SX. Osborne’s return to racing is yet to be determined as he assesses the proper recovery time for his injuries.

250SX East
Hampshire had a great start to the day as he locked in the fourth-fastest time in qualifying. In 250SX Heat 1, he had some bad luck as he got caught up in a first-turn pileup and was forced to begin the race at the back of the pack. He quickly climbed to 10th by the second lap, ultimately securing a sixth-place finish in the heat. In the Main Event, Hampshire got off to a seventh-place start and he charged his way into third on the opening lap. He maintained third for a majority of the race but he ended up tweaking his knee in a corner and ultimately lost ground with two laps to go, finishing fourth on the day. With two podiums under his belt, Hampshire sits third overall with four rounds remaining in the 250SX Eastern Regional Championship.

“Obviously I would have liked to finish on the podium but all-in-all, I’m pretty happy with how tonight went,” Hampshire said. “While I was running third, I dabbed my leg in a corner and it gave me a stinger on my knee, which kind of caused me to mess up the rhythm a couple of laps and [Jeremy] Martin was able to get around me. With the track being as high-speed as it was, I made the decision to be smart and take fourth so I could move on to Indy and get better results.”

His teammate, Jalek Swoll, got off to a top-five start in 250SX Heat 2 but a rider ahead of him went down in the whoop-section and Swoll, with nowhere to go, ran into him and went down on the opening lap. He re-mounted in the 14th position and charged his way up to 11th, just missing the transfer by two spots. In the Last Chance Qualifier (LCQ), Swoll captured the holeshot and raced his way to a victory, taking claim to one of the last few spots in the Main Event. With a not-so-favorable gate pick, Swoll didn’t get off to the best start as he sat outside the top-20 on the opening lap. He immediately put his head down and charged his way up to ninth just before the halfway point. From there, he maintained a solid pace to finish ninth for the night, capturing his third-consecutive top-10 through the first four rounds. Swoll now sits 10th overall in the 250SX Eastern Regional Championship.

“Honestly, the start of the day didn’t go too well but once the night show came around I actually felt really good on the bike and all the struggles I had in the beginning of the day went away,” Swoll said. “I actually I think the LCQ helped me a little bit – I got more time on the track and more time on the sand tire, so it was good. I was happy with my speed tonight and I feel like I was catching the guys in front of me but I had some mistakes that kept me from breaking into that group ahead.”