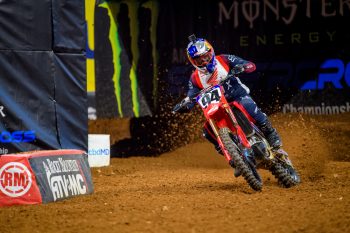 The German native, who shares the red-plate with Eli Tomac (Monster Energy Kawasaki) after capturing victory in Atlanta, is hoping to deliver a maiden victory at the unique event on what is a milestone weekend.

“We had to get out to the front and I really focused – obviously I want to win every weekend, but I knew I wasn’t stressing about anything, because seven points isn’t a lot,” Roczen said after closing the gap last weekend.

“At the same time, you don’t want that gap to get any bigger. I’m really looking forward to next weekend – I’ve never won Daytona, but I feel the 50th anniversary race will be good to me, so I’m putting a little extra focus into next weekend.”

The Team Honda HRC rider has three wins to his name this season, along with four podium results.