In this edition of Rewind, we reflect on Justin Brayton’s maiden main event victory at the Daytona Supercross in 2018, which came a week prior to his 34th birthday.

The unique layout of Daytona has always delivered a variety of winners over the years, but the ‘outdoor’ nature of the circuit never thought to be in the favour of Brayton, who was still riding for Smarttop Bullfrog MCR Honda at the time.

The number 10, who battled an illness all night, qualified sixth before going onto claim a surprising and commanding victory in his heat, where he crossed the line 11 seconds ahead of Red Bull KTM Factory Racing’s Marvin Musquin. 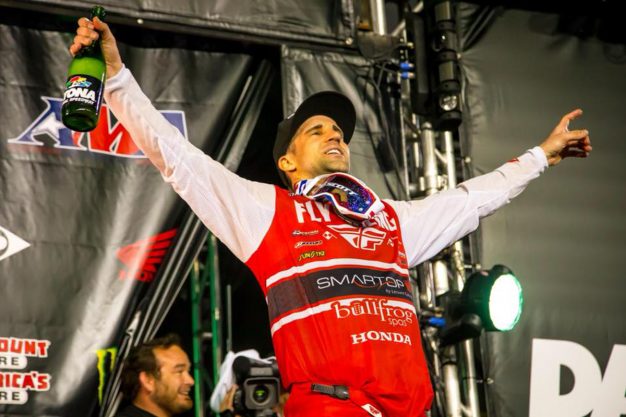 Pulling a stellar start in the 18-lap main proved to be the key to his success, as he made an early pass Team Honda HRC fill-in Christian Craig to secure the lead.

He didn’t have it easy, however, as Musquin charged by him, although the Frenchman made a mistake under the pressure of Brayton, allowing the Iowa native to regain a firm grip of P1.

Despite a late charge from Eli Tomac (Monster Energy Kawasaki), who came back from last after a crash on lap one, Brayton was able to hold on to secure the first-ever Supercross main event victory of his career by a margin of 4.450s.

“I can’t even describe it – this is just – a Supercross win at Daytona, are you serious? Oh my gosh, this is so awesome,” an emotional Brayton said on the podium. “I’ve had so many people support me through the years, and like you said, I’m turning 34 this week, but I feel good – I feel great. 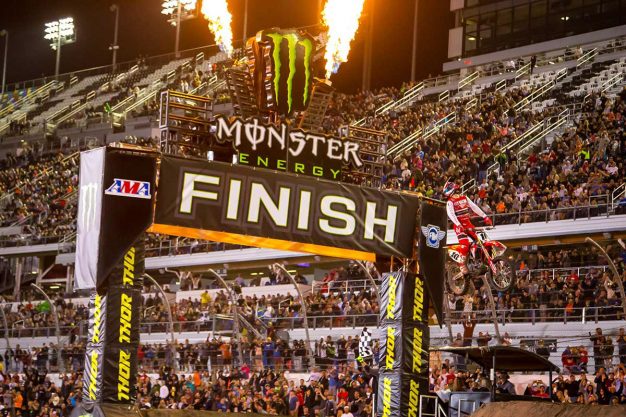 “This is amazing – I got a Supercross win at Daytona – it’s crazy. I’ve been sick as a dog all week, and man, it’s just amazing. This is just crazy, especially at Daytona – I’m not an outdoor guy and this is like an outdoor track – I’ll take it.

“I sprinted those first few laps and my lungs were so closed off – I kept saying after practice and heat that my lungs are so closed off. I knew if I could put in some fast laps in the beginning, I was fast enough to get away and get a cushion. It worked.”

Brayton went onto the finish the season fifth in the championship standings, the best series result of his lengthy Supercross career. Brayton returns to Daytona International Speedway this weekend with Team Honda HRC for round 10 of the 2020 Monster Energy Supercross season.