Roczen dominates in Atlanta taking third victory of the season 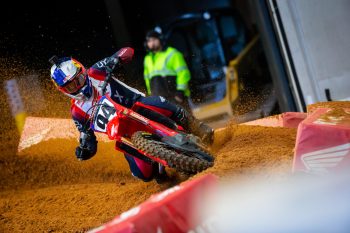 Ken Roczen rode flawlessly at round nine of the AMA Supercross series in Atlanta, Georgia, securing his third victory of the year by a 13-second margin. The Team Honda HRC rider’s win enabled him to close the gap in the title chase, leaving him tied for the points lead and sharing the red plate.

Roczen was dominant from the moment he took to the track’s Georgia clay, scoring his sixth heat race win of the season before launching his CRF450R to the holeshot in the main event. As chaos unfolded behind him, Roczen was cool, calm and collected as he rode at the front, quickly gapping the field and riding unchallenged to the 13thpremier-class win of his career. Teammate Justin Brayton was unfortunately tied up in the chaos, as a less-than-desirable start left him fighting for position mid-pack. At the halfway point, Brayton was riding strong and making up ground, but a tip-over in the sand corner caused him to lose all the ground he had made up. He took the checkered flag in 12thplace.

It was a busy Friday for Team Honda HRC’s Ken Roczen and Justin Brayton, as they participated in press day, speaking with media and getting the opportunity to ride the track for two 12-minutes sessions. Later that evening, Roczen and Brayton were joined by GEICO Honda’s Chase Sexton and Jeremy Martin at Mountain Motorsports for a pre-race party, where hundreds of fans were on hand to get photos and autographs.

The Atlanta Supercross was on a daytime program, which meant it started three hours earlier than normal, with opening ceremonies beginning at 4:30 p.m. Although that made for a much earlier morning than normal, teams and riders enjoy wrapping up the night early at these events. “I like the daytime schedule,” Roczen said. “I’m a morning person anyway, so having it start a little earlier in the day isn’t really a big deal. It’s actually nice to get finished earlier and not be at the track so late. We’re even able to catch a late flight home, so nothing beats sleeping in your own bed and waking up at home, especially after a win.”

Roczen was impressive during daytime qualifying, laying down fast laps in both sessions but ultimately landing second-quickest at 50.514”. Smartop/MotoConcepts/Bullfrog Spas Honda’s Justin Hill was the next-fastest Red Rider, landing third with a 50.921” time, followed by his teammate Malcolm Stewart in sixth with a 51.141”. Brayton rounded out the top 10with a 51.452”.
The AMA Supercross season cleared the midway point in Atlanta, which also marked the ninth consecutive week of racing for the premier-class riders, and there are five more rounds before the series’ only break, on Easter Weekend. “The schedule is so tough,” Roczen said. “Being in the middle of the season, everyone is just trying to manage their bodies and not get too overexerted during the week.”

The GEICO Honda squad had a picture-perfect day in Atlanta, with Chase Sexton dominating en route to his second consecutive win. Sexton started the day off strong by scoring the fastest qualifying time in practice before grabbing the win his heat race. When the gate dropped on the main event, the Illinois native got off the line to a strong second-place start. He briefly fell to third on lap three, but moved back into second and began his attack on the leader. Sexton rode patiently, waiting for the perfect opportunity to make the pass, and it came on lap nine. Once in front, Sexton rode impressively, gapping the field and taking the win. Teammate Jo Shimoda also had a noteworthy night, working his way from outside the top 10 to score a career-best fifth place. After capturing the win in his heat race, Jeremy Martin looked to be poised for a podium finish in the main event. Unfortunately, he went down while running fourth, forcing him into the mechanics’ area on the following lap. He was able to return to the race but finished in 19thplace.

With Roczen and Sexton both winning their respective main events, this marks Honda’s first sweep since 2015, when then-GEICO Honda riders Eli Tomacand Justin Bogle both won in Detroit.
As has been the case at nearly every round this season, there were more Hondas than any other brand in main events, with six in 450SX and seven in 250SX East.

On Sunday following the Atlanta Supercross, Team Honda HRC and GEICO Honda staff and riders headed directly to Clermont, Florida, where they’ll spend the week doing some pre-Daytona testing at the Moto Sandbox training facility. It’ll be a busy week for everyone, as Red Bull’s film crew will be documenting footage for a “Moto Spy” episode.

Following their weekday training activities, Team Honda HRC heads to Daytona Beach, Florida, for Saturday’s race at Daytona International Speedway, host of what is arguably the most challenging race of the circuit, for round 10. On Friday, Brayton and Roczen will participate in press day before heading to the main Honda display booth to sign autographs from 3:30 to 4:30 p.m.

Ken Roczen:
These wins just keep getting sweeter and more fun each time! I’m so happy with how tonight went and stoked to have the red plate again. The last couple weekends have been tough but I’ve managed to minimize the damage, which was huge for us because it put us in a good position for a situation like today. With all the chaos, we made up seven points in one night and now are tied for the points lead again. The battle continues for the championship.

Justin Brayton:
I’m pretty disappointed with tonight’s result. It seems like I can’t catch a break. Last weekend was really tough and I did everything I could this week to rest and recover my body. I felt good on press day, qualified okay, then got a good start in my heat race and finished third. I was hoping for a main event free from chaos, but unfortunately that wasn’t the case. I didn’t get the greatest start, then got hit by Cooper [Webb] and went down in the sand. My results haven’t been reflecting my speed, so I just need to focus on getting better starts and staying out of the mess.