250SX East rookie impresses at the third round of the championship. 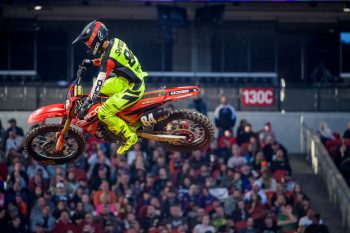 Rookie Jo Shimoda insists increased aggressiveness at the beginning of main events is what led him to score a career-best fifth in the 250SX East category at Atlanta’s Monster Energy Supercross.

The Geico Honda ace was highly-impressive at the Georgia round, finishing fifth in his heat before putting in a stunning 19-lap campaign in the main event to cross the line in P5.

The first two rounds of the East coast proved to be a major learning curve for the Japanese native, which he put into action on Saturday night to secure the rewarding result.

“I had a good start in my heat and I was able to bump up to second, but then I hit a tough block after finish line which put me down to fifth,” Shimoda explained. “In the main event, [I had a] bad start, but I was able to get to fifth from 13th.

“That’s a big improvement for me. The main thing I have learned after the first two races was to be more aggressive at the beginning of the race. I made more moves early and that helped me move up.”

Shimoda is positioned seventh in the championship standings as the series heads to Daytona International Speedway in Florida this Saturday.