Atlanta’s ninth round of Monster Energy Supercross saw Ken Roczen secure a dominant third victory of the season. In this edition of Debrief, the Team Honda HRC rider recounts his triumph with questions from the post-race press conference. 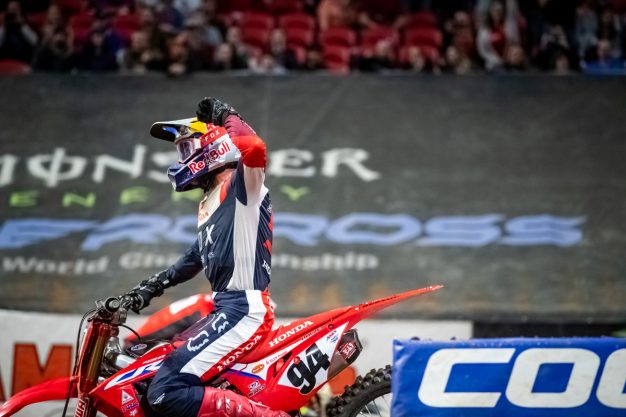 Congratulations. That was one of the more wild race we’ve seen this year from second and back – you could obviously hear the crowd getting involved at different times, did you ever peak over to take a look?

I really had no idea – I just had tunnel vision to be honest. I think that’s the way to go, especially when you have a bit of a gap. The track broke down a lot more than what I thought it going to, because it was a bit more hard-packed. I feel like we had everything today with the track – obviously the sand, after the finish line the turn into the rhythm was pretty soft, the whoops – it was soft in the turn before – but the rest was hard and marbly. We had everything, for sure, and the track broke down a lot. I had no idea what was going, I just to focus on myself. Races like that are a lot of fun, but the track got so rough – there’s a lot of mistakes that can happen if you lay-off your focus for just split second. You really have to keep your composure no matter, and none of these wins come easy. For me, this was a super fun race.

You’re not going without a fight, you want that red-plate back…

Yeah, absolutely. This win tonight was super important for us and I’m glad we pulled it off. Like I said on the podium, the wins keep getting more and more fun, and they’re super addicting. So it came just at the right time, and I’ve had pretty good races here before – I won in 2014 as well. It was just our night – I gelled really well with the bike, I had no complaints there and just left it the same. I felt good physically today – I just laid it out there today in practice, I had a good heat race and overall it was an awesome day. I really can’t complain, and the season is still long – the last couple of rounds have been tough, I just wasn’t myself. We really minimised the damage on those days, but tonight, we won and it’s awesome. I still can’t believe it.

You get the share red plates next [with Eli Tomac], talk about that…

Yeah, it’s awesome. I think the red-plate looks awesome on our bike [laughs] – I’m pretty sure it looks good any bike, but I do like the all red. Like I said, the last couple of weekends have been tough and I minimised the damage there, which is huge for us, for that reason. Everything can come undone in one race, so you’ve got to bring your focus and try your best every single weekend. You see tonight we made up seven points in one night, and we’re back even in points. The battle continues. 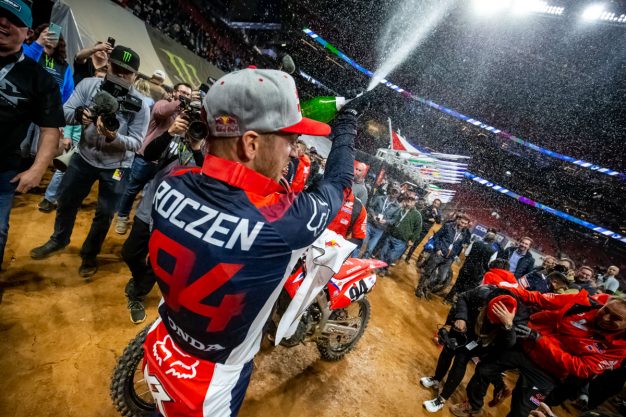 Is there anything you can point to tonight that made it better?

It was definitely an ‘on’ night for me – we’ve been doing tiny little tweaks with the bike, and that really helped for me. I was able to not pick anything out during the day that was standing out to me that I couldn’t deal with, because no bike is ever perfect. For me, it was how I liked it – every time I went out there, I understood the bike more and more and felt more and more comfortable, and knew exactly what it was doing. That helped out along with tweaking it during the week – that helped out as well.

It seems you’ve become really close with your teammate Justin Brayton, and we know you and Chase [Sexton] ride together a lot. Talk about the team atmosphere at Honda – it seems you guys have a good unit…

Yeah, our team atmosphere is amazing. With Chase, we’re obviously around it each other every day at the Sandbox – that works out great and we’re great training partners. And with JB, the elderly in the team [laughs], we’re having a great relationship and we help each other out a lot because I want him to do good and he wants me to do good. We just try to help each other out a lot, and just in general, their whole entire family has become close to us, and it’s really a dream come true the way the atmosphere is in the team right now.

Was this the firewall for you guys after seeing Tomac standout over the last few weeks?

That was the goal for me and I knew we had to do something because obviously him clicking off wins – I have to win, there’s no way around it. Getting good starts is definitely key, but with tracks like this, being at the back of the pack, things can happen so quickly. We had to get out to the front and I really focused – obviously I want to win every weekend, but I knew I wasn’t stressing about anything, because seven points isn’t a lot. At the same time, you don’t want that gap to get any bigger. I’m really looking forward to next weekend – I’ve never won Daytona, but I feel the 50th anniversary race will be good to me, so I’m putting a little extra focus into next weekend.