Webb describes gruelling main as ‘the hardest race’ of his career 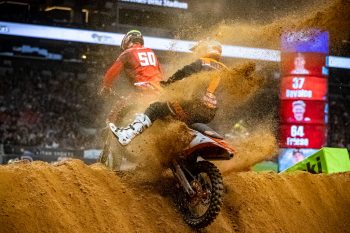 Reigning champion Cooper Webb has described Atlanta’s Monster Energy Supercross main event as ‘the hardest race’ of his career after putting in a spirited ride to land on the podium, just one week after he was carted off the track with multiple hematomas.

Webb pushed through severe pain to put in a late charge in the 25-lap encounter, passing Martin Davalos (Team Tedder KTM) on the last lap for the final spot on the podium, while also fending off a challenge from points leader Eli Tomac (Monster Energy Kawasaki).

The Red Bull KTM Factory Racing rider was absent from the post-race press conference, where he was understood to have sought medical treatment following podium celebrations.

“That was probably the hardest race I’ve ever had,” Webb stated. “I was way back and just put my head down and tried to do the best I can. I got a few gifts from the guys ahead of me but man, it was painful.

“I knew it wasn’t going to be fun or easy, but that’s racing. It’s a long way out but the only thing keeping me going is this championship, so we’ll do whatever we can.”