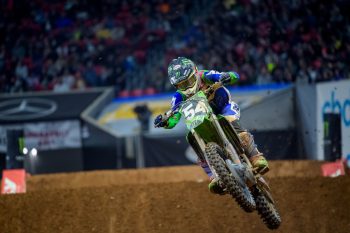 Monster Energy Pro Circuit Kawasaki’s Jordon Smith enjoyed a solid race back in the top five with a fourth place inside the Mercedes Benz Stadium. As the closest race for the North Carolinian, he felt the impact of having friends and family cheering him on and earned his best finish of the season. Teammate Garrett Marchbanks was also on pace to finish just behind him, but an issue late in the race pushed him back to seventh.

The home race for Smith was just what he needed to bounce back from his ride in Arlington. The familiar Georgia clay was a welcomed sight for the rider who also trains in the Peach State. Smith got a good start and settled into fifth behind his teammate. He waited for the right moment and was able to get around. The front runners had charged already at that point, but Smith came away with a solid ride and his best of the season in fourth.

“It felt good to be so close to where I train and grew up,” said Smith. “I was ready to breakthrough and have a race track that I was meshing with. I wish I could have kept the front guys closer, but we’ll take it one step at a time and make our way onto that podium.”

Marchbanks showed speed all day and was excited to run after another top five finish, if not more. He settled into fourth on the start of the main event before Smith got by and pushed him back to fifth. Marchbanks stayed close but near the final laps of the race, he had an issue that pushed him back to seventh.

“Seventh wasn’t what I felt like I had to give today, but sometimes that’s how racing goes,” said Marchbanks. “We’ve been making good progress testing during the week and I’m really looking forward to the outdoor style track next weekend in Daytona.”