Decotis on pace at Atlanta Supercross 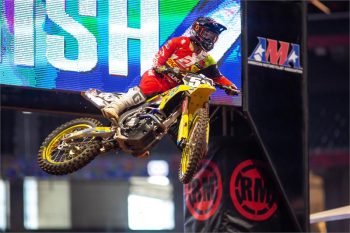 Injured Suzuki RM-Z450 riders, Joey Savatgy and Fredrik Noren, also came out to the race to meet with fans and cheer on “Jimmy D”.

After a hard hit last weekend during practice, Decotis spent a week recovering and it paid off with solid pace. He may have missed a round, but he didn’t skip a beat, posting the eighth fastest lap time in qualifying. In his heat race, Decotis ran as high as third, but a small mistake cost him a direct transfer to the Main Event. Decotis got a mid-pack start in the LCQ; running the fastest lap times of that race that allowed him to steadily move forward and easily qualify into the Main.

In the Main Event, Decotis rounded the first lap and hovered just outside the top-10, eventually bringing his return ride home in 13th. Decotis currently sits in 14th in points even after missing one round out of the first three. As he feels better and recovers fully, he expects to put his JGR-tuned RM-Z250 on the podium during the closing rounds of the series.

“Atlanta is always a cool race for the JGR team as it’s the closest to our home,” said Decotis. “The track was awesome, and my bike was working great. I’m bummed on my finish as I haven’t been riding much and it’s showing on the weekends. I’m really proud of everyone at JGR for sticking with me and believing in me. It’s an amazing feeling when a team supports you through your struggles. I’m looking forward to Daytona this weekend!”

“Jimmy was good early on in the day but was struggling from being banged up and not riding during the last three weeks. He was eighth in lap times during qualifying. He had a good start in the heat but crashed while running fourth and had to go to LCQ to get into the Main. He should get better each week.”

The team heads south to the sands of Florida at the Daytona Supercross. JGRMX Yoshimura Suzuki Racing will be on site for Fanfest in the pits and is looking forward to helping Decotis deliver a strong podium finish.