Factory Husqvarna pilot finishes outside of the top 10. 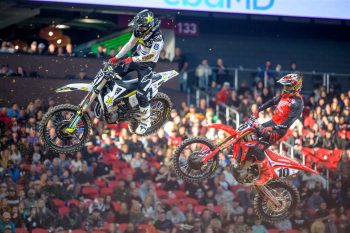 Jason Anderson says he ‘didn’t get the good end of the stick’ after being involved in a number of battles at Atlanta’s ninth round of Monster Energy Supercross.

The 2018 premier class champion was in the frame for a strong result at Mercedes-Benz Stadium, sitting just outside of the top five, however the Rockstar Energy Husqvarna Factory Racing came off second-best on numerous occasions, including an incident with Vince Friese (Smarttop Bullfrog MCR Honda).

He drifted to ninth by the penultimate lap, although further challenges on the final time around saw him ultimately cross the chequered flag in 11th position.

“The main event was just a battle out there and I didn’t get the good end of the stick most of the time,” Anderson explained. “I ended up finishing not as good as my riding was but we’ll move onto next week.”

Anderson’s run of mixed results sees him positioned fifth in the championship standings as the series heads to Daytona International Speedway in Florida for the 10th round.