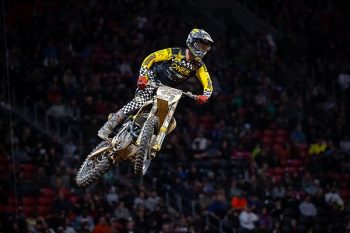 250SX East
Hampshire kicked off the day on a high note by securing a third-place qualifying position. In 250SX East Heat 2, he shot off the line to capture the holeshot and early lead. He battled inside the top three for the rest of the race to secure a third-place finish in the heat. In the Main, Hampshire once again grabbed the holeshot as he led the first eight laps of the race. From there, he engaged in battle with reigning 250SX Champion, Chase Sexton, where he ultimately finished only 2.78 seconds back for second-place.

His teammate, Jalek Swoll, got off to a solid fourth-place start in 250SX Heat 2. He made a mistake and got shuffled back to 10th early on but he fought his way back up to secure the final transfer position. In the Main Event, Swoll got off to an eighth-place start on the opening lap and he battled inside the top-10 early on. He settled into ninth and rode a solid pace to ultimately finish ninth for the night.

“I got a good start from the outside but I got hung up in the second corner and came out sixth,” Swoll said.“Two ninth-place finishes in a row isn’t too bad but I’m just missing a little bit of intensity in the beginning of the race. I feel like I can be a few spots higher but I need to get better starts.”

450SX
It was a tough ending to the night for 450SX teammates Dean Wilson and Jason Anderson, who had a great night of racing, despite some bad luck in the Main Event. For Wilson, the day started off well a fifth-place qualifying position. He grabbed a top-five start in 450SX Heat 2 and he diced back-and-forth for fifth early on. On the final lap, Wilson made a big charge to overtake fifth and he secured a solid transfer into the Main Event. In the Main, he got off to a great start in fourth and quickly settled into fifth, where he began an early battle with his teammate Anderson. While racing Anderson for the sixth spot, Wilson got tangled in a three-rider pileup and he dropped back to 10th. He did his best to make a charge in the final laps, where he ultimately secured 10th.

“I’m a little bit disappointed with my night because I feel like I was in a really good position to get a top-five or even a podium,” Wilson said. “Unfortunately, a few things happened that kind of held me up and I ended up crashing but I feel like I rode really well and my fitness felt really good.”

Anderson, the fourth-place qualifier, got off to a second-place start in 450SX Heat 1 and he battled for nine solid laps to secure a second-place transfer into the Main Event. In the Main, he got off to a sixth-place start and he quickly worked his way up to fifth by lap four. He mixed it up inside the top-six through the first half of the race before making a big charge late in the race. While attempting to make a pass for fourth, Anderson got off rhythm and lost two positions but he continued to push into the final lap. Despite a hard fight, Anderson succumbed to another bout of bad luck on the final lap when another took out his front tire and he went down, dropping him back to 11th where he ultimately finished for the night.

“The Main Event was just a battle out there and I didn’t get the good end of the stick most of the time,” Anderson said. “I ended up finishing not as good as my riding was but we’ll move onto next week.”

Rockstar Energy Husqvarna Factory Racing’s Zach Osborne missed Round 9 due to injuries sustained during a practice crash last week. Osborne’s return to racing is yet to be determined as he assesses the proper recovery time for his injuries.