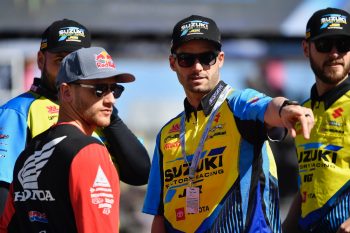 Broc Tickle will miss the upcoming rounds of Monster Energy Supercross after injuring his hand last week at Arlington’s eighth round.

The JGRMX Yoshimura Suzuki Racing rider, who recently made his comeback from an anti-doping sanction, revealed he’ll be sidelined following further medical examination on his hand this week.

“It has been awesome being back at the races and thankful for the opportunities that have put myself back behind the gate,” Tickle said in a statement. “After getting X-Rays on Monday, I’m going to miss some races and be back as soon as I’m healed up.

“As I make progress and have more of a timeline for when I’ll be back at the races I’ll keep you guys updated. Obviously, I’m bummed but, always could be worse. I’m thankful and grateful for the support of everyone that has welcomed me back behind the gate.”

The depleted factory-backed Suzuki squad is understood to see 250SX East contender Jimmy Decotis line-up this weekend in Atlant after he too was ruled out of Arlington.