Fourth a solid finish despite struggling throughout second round. 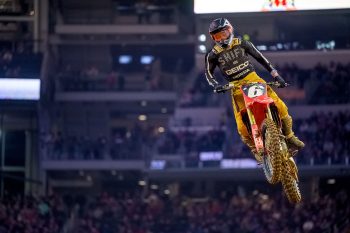 Geico Honda’s Jeremy Martin has pointed to a flu that affected his form in the Arlington Triple Crown, round two of 250SX East in the 2020 season.

Martin finished just shy of the podium in fourth overall after registering a consistent run of 5-3-4 results and he was content with that outcome.

“It was a straight struggle for me in Dallas,” he stated. “I fought it all day long with arm-pump and being under the weather with the flu.

“Wasn’t good out of the gate come time for the night show and, with the shorter races in the Triple Crown format, I really had to work hard to make up ground each moto. I was putting in a charge but just didn’t feel quite like myself out there. Not stoked on a fourth overall, but it could have been worse.”

Martin has a short turnaround to recover in time for Atlanta this weekend, still ranked third in the standings as Monster Energy Supercross reaches its second half of the series.