Assorted racer comments following the eighth round of Supercross.

In Quotebook, a selection of riders detail round eight of the 2020 Monster Energy Supercross, an FIM World Championship, in Arlington. 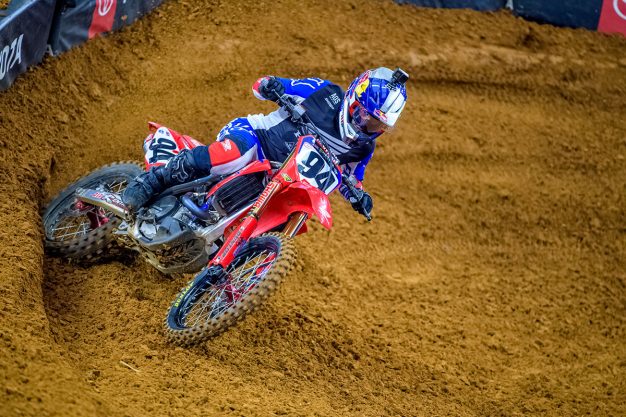 Jason Anderson (Rockstar Energy Husqvarna Factory Racing) – Third:
My weekend went pretty good, it’s hectic out there with the Triple Crown format. My riding seemed to be pretty good all night but I think the most eventful part for me was the whoops. Other than that, I rode good, put myself in good positions and was able to come out with a podium. I’m having a good time and I’m excited to keep going!

Zach Osborne (Rockstar Energy Husqvarna Factory Racing) – Fifth:
It’s nice to finally have a good result for the team and also for me, it just makes the workload a lot easier when you have a decent weekend. To lead some laps in the last Main and finish 7-4-3 with a consistent night, I feel pretty good about it, so we’ll just continue to work and keep this momentum rolling in the right direction for the rest of the season.

Dean Wilson (Rockstar Energy Husqvarna Factory Racing) – Ninth:
I’m not fully satisfied with the result tonight but unfortunately I crashed the first two races, which really hindered my overall result. I feel like I definitely had some positives from today – the speed is coming back and I’m feeling a little bit better. I’m healthy and ready to move onto next weekend.

Justin Barcia (Monster Energy Yamaha Factory Racing) – Fourth:
It was strong racing tonight in Dallas. We got a little bit better on the starts, but still needed something there to get us on the podium. The track was not super technical, but took a few guys out of the race. All in all, my race was really good. I made charges and made passes. I felt really strong and stayed in the hunt. My starts are going to keep getting better, I just need to stay consistent and keep trying my hardest. I’m ready for next week, for sure.

Aaron Plessinger (Monster Energy Yamaha Factory Racing) – Eighth:
Dallas was another step in the right direction for me. I felt good in practice, was really flowing and riding well. The dirt was a little slick on top, but got rutted and really rough. The whoops broke down quite quickly and we were jumping them by the second or third practice. I liked it though. It had some technical stuff, but overall I’m just happy to be back on soft dirt. I’m looking forward to this week riding. I ended up eighth overall and that’s my best finish so far this year. Next week we’ll go to Atlanta which is where I got my best finish at last year. Hopefully we can get better starts and run up there and break into the top five.

Eli Tomac (Monster Energy Kawasaki) – First:
We showed that we could fight and overcome adversity tonight. To be completely honest, I just got a bad start and struggled to find any rhythm in the first main event. Once I got into fifth place I kind of just got tight and couldn’t go forward after that, but I was able to quickly regroup with the team and in the next two main events, we had a much better gate pick each time and were able to control the races from there. I am just happy to be leaving here healthy. We raced something like 50 laps tonight and as you saw, the track took out a lot of key dudes. I am glad we’re through it and looking forward to Atlanta next weekend.

Ken Roczen (Team Honda HRC) – Second:
The first main was really good. I made some moves early and while I wouldn’t say I checked out, I rode up front the whole race. It was good to get that first win and start with a low number for the night’s overall points. I think the second race is the most important and we wanted to go out there and get a good finish, but it just wasn’t our race at all. I didn’t get the start I wanted and then couldn’t find the same momentum. I’m happy with how we executed the last race though. I battled hard and went back and forth with Eli a couple times and just rode much better in traffic, having people in front of me and making some passes. All in all, with how many crashes there were throughout the whole day and night, and how I struggled with the track overall, I’m really happy to come away healthy and with second overall.

Justin Brayton (Team Honda HRC) – 21st:
Man, what a rough night. I had five crashes in one day—that’s more than I’ve had total in the past few years! I had three in practice, and the last one I thought was going to end my night. I caught my foot on the takeoff of the finish-line jump and it sent me down hard. I decided to suit up for the races after being checked out and cleared by the medical staff. In the first race, I got a good start, was running in fifth and feeling good. Unfortunately, with a few minutes to go, I crashed in the whoops. Then in the second ra, race, I crashed again, high-siding in a corner, and that one ended my night. I’m honestly sitting here in disbelief about how it all happened, but I’m also thankful nothing is seriously injured and I’ll be good for Atlanta. Shane McElrath (Monster Energy Star Yamaha Racing) – Second:
I felt awesome all day. I didn’t put myself in a good position tonight with the first two starts. It really tough to catch the leaders, but I fought hard all night and at times maybe a little too hard. I’m happy with my last race and motivated to get behind the gate again next weekend!

Garrett Marchbanks (Monster Energy Pro Circuit Kawasaki) – Fifth:
I am happy with today’s result. I honestly didn’t feel like myself all day today and struggled in sections of the track. I had tweaked my ankle during practice which really bugged me all night long, so to finish with another top five, I’ll take it. We will continue to work throughout the week to find an even more comfortable flow so that we are ready to go in Atlanta next weekend.

Jordon Smith (Monster Energy Pro Circuit Kawasaki) – 13th:
Today is one of those days you just want to forget about. I had some good battles in the first main event and was excited to improve my position in the last two races to fight for a podium or even an overall win. My starts all night were dialed, but man I felt like I was a magnet out there to everyone else. I kept getting bumped, cleaned out, knocked down, you name it. I did the best I could and am proud to say I never gave up. We will regroup this week as a team and come out swinging in Atlanta next weekend. That is somewhat of a hometown race for me, so it will be awesome to race again in front of my family and friends.

Chase Sexton (Geico Honda) – First:
Last year was nice to win the championship, but not the way I wanted it to happen. Shane winning that first race [last week in Tampa], where he kind of just checked out, I’m like, ‘this can’t happen again. I have to stop it’. It was really important tonight to get a good result and to be up here on the top step. First race was chaotic, made the best of it. Second race, I was like, ‘I’ve got to go out here and win this thing’. I was really happy with my bike, the whoops were good and I feel like that was a strong point.

Jeremy Martin (Geico Honda) – Fourth:
It was a straight struggle for me in Dallas! I fought it all day long with arm pump and being under the weather with the flu. Wasn’t good out of the gate come time for the night show, and with the shorter races in the Triple Crown format, I really had to work hard to make up ground each moto. I was putting in a charge but just didn’t feel quite like myself out there. Not stoked on a fourth overall but could have been worse.

Jo Shimoda (Geico Honda) – 10th:
I was struggling a little bit in practice and timed qualifying. The whoops were tough. I actually crashed one time, and in the other one I didn’t get any clear laps. I ended up 13th in lap times, so I didn’t get a good gate or starts. In the first main I got taken out by someone and I could only get back to 14th. After that, in both of last two main events, I couldn’t get a good first lap. I did my best to come back through, I ended up 10th and eighth in those 10th overall for the day. It was a tough race but I did learn some things doing all of those laps.

RJ Hampshire (Rockstar Energy Husqvarna Factory Racing) – Third:
In the first race, I got up front and won my first Main Event and I was stoked on that, I fought hard for it. I felt like we got a good start to the year now. Last weekend was a bit rough but I’m confident that we’re just going to keep getting better now.