Crashes finally get the better of Brayton in Texas non-finish

Team Honda HRC rider planning to be on track in Atlanta. 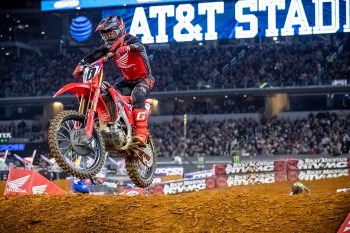 It took five crashes, but the last one finally ended Justin Brayton’s evening in Arlington to cap-off a difficult Triple Crown outing.

Team Honda HRC’s Brayton was ninth on the charts in qualifying, despite a late fall almost causing him to sit out of the night program.

“Man, what a rough night,” commented Brayton. “I had five crashes in one day – that’s more than I’ve had total in the past few years! I had three in practice and the last one I thought was going to end my night.

“I caught my foot on the takeoff of the finish-line jump and it sent me down hard. I decided to suit up for the races after being checked out and cleared by the medical staff.”

Once cleared, Brayton rose to the occasion in the first of three 450SX finals and was circulating inside the top five when he crashed in race one, remounting to collect 15th. It was another fall in final two that ultimately ended his night.

“In the first race, I got a good start, was running in fifth and feeling good,” he continued, frustrated with how round eight unfolded. “Unfortunately, with a few minutes to go, I crashed in the whoops.

“Then in the second race I crashed again, high-siding in a corner and that one ended my night. I’m honestly sitting here in disbelief about how it all happened, but I’m also thankful nothing is seriously injured and I’ll be good for Atlanta.”