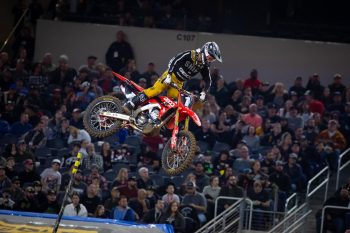 Chase Sexton made an emphatic statement at round two of the 2020 AMA Supercross Championship, winning the 250SX East Region class at AT&T Stadium with a dominant run through the Triple Crown format. Sexton’s 2-1-2 scores outpaced the field, and the victory put him back at the sharp end of the series’ standings, now tied with Shane McElrath for the points lead.

Sexton overcame a bad start in the first race to briefly take the lead from RJ Hampshire, but Hampshire knocked Sexton down to retake the lead. Sexton recovered for second, passing McElrath on his way back through the field, which was key after McElrath ran away from the field a week earlier. In race two, Sexton checked out for the win. He followed McElrath home in the third race, content with the overall victory.

“Last year was nice to win the championship, but not the way I wanted it to happen,” said Sexton. “Shane winning that first race [last week in Tampa], where he kind of just checked out, I’m like, “This can’t happen again. I have to stop it.” It was really important tonight to get a good result and to be up here on the top step. First race was chaotic, made the best of it. Second race, I was like, “I’ve got to go out here and win this thing.” I was really happy with my bike, the whoops were good and I feel like that was a strong point.”

Teammate Jeremy Martin didn’t have his best day, but he made the most of the circumstances to net fourth overall with 5-3-4 scores. The result keeps Martin, who finished third in last week’s opener, in the title hunt.

“It was a straight struggle for me in Dallas!” said Martin. “I fought it all day long with arm pump and being under the weather with the flu. Wasn’t good out of the gate come time for the night show, and with the shorter races in the Triple Crown format, I really had to work hard to make up ground each moto. I was putting in a charge but just didn’t feel quite like myself out there. Not stoked on a fourth overall but could have been worse.”

Rookie Jo Shimoda continued his learning process, with the intense Triple Crown format and tricky Dallas track making for a tough night. He improved each time on the track, though, and persevered for 10th overall with 14-10-8 scores.

“I was struggling a little bit in practice and timed qualifying,” said Shimoda. “The whoops were tough. I actually crashed one time, and in the other one I didn’t get any clear laps. I ended up 13th in lap times, so I didn’t get a good gate or starts. In the first main I got taken out by someone and I could only get back to 14th. After that, in both of last two main events, I couldn’t get a good first lap. I did my best to come back through, I ended up 10th and eighth in those 10th overall for the day. It was a tough race but I did learn some things doing all of those laps.”