Leading laps in Triple Crown adds to confidence of Osborne 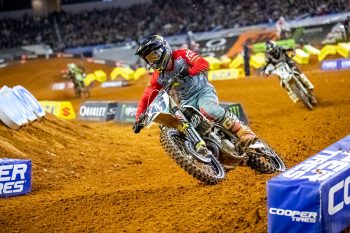 Finishing fifth overall after leading a series of laps in the final 450SX outing at Arlington served as a lift in confidence for Zach Osborne on the weekend.

The Rockstar Energy Husqvarna rider went 7-4-3 in the Triple Crown event, returning to the top five for the first time since Anaheim 2 in January.

Osborne has endured a mixed campaign in scoring outside of the top 10 in the past four rounds, however, he managed to turn things around in one of the toughest rounds of the year yet.

Leading seven laps in final three on his way to P3 was the best result of Osborne this season, despite being overcome by title contenders Eli Tomac (Monster Energy Kawasaki) and Ken Roczen (Team Honda HRC) in the latter stages.

“It’s nice to finally have a good result for the team and also for me,” Osborne said after finishing inside the top five for the third time this season. “It just makes the workload a lot easier when you have a decent weekend.

“To lead some laps in the last main and finish 7-4-3 with a consistent night, I feel pretty good about it, so we’ll just continue to work and keep this momentum rolling in the right direction for the rest of the season.”

The weekend’s result has elevated Osborne to ninth in the standings eight rounds into the 2020 Monster Energy Supercross season, with Atlanta next on the schedule this Saturday night.