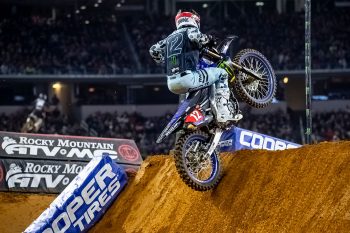 McElrath gradually improved his results throughout Arlington for the runner-up position, going 3-2-1 in the Triple Crown finals.

An instrumental hole-shot in the final race saw him lead the opening lap and go on to take his lone win of the round, which placed him second behind defending champion Chase Sexton (Geico Honda).

“I feel like second place doesn’t show everything that we had to go through tonight,” McElrath reflected. “That’s part of the Triple Crown and I was prepared for it, I just didn’t really execute the first two starts like I needed to tonight.

“I’m alright with my riding. All night I felt like I was going good, I just didn’t put myself in a good position, so I’m excited to move forward and we’ll be there next weekend.”

Monster Energy Star Yamaha’s McElrath retains the points-lead following two rounds of 250SX East, but now shares the red plate with Sexton after the pair reversed their results on the weekend.