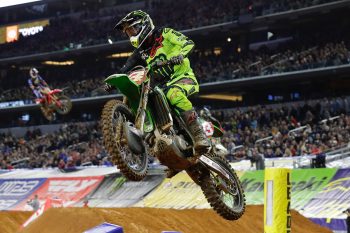 Roczen went on to win by 3.971s over Webb and Anderson in that order. Justin Barcia (Monster Energy Yamaha) and Tomac – recovering from 13th on lap one – filled the top five.

Rocky Mountain KTM WPS’s Blake Baggett took the holeshot in final two, however, an improved start from Tomac saw him shoot straight into the lead. He would go on to win with a 3.295s buffer over Anderson and top qualifier Justin Hill (Smartop Bullfrog Spas MotoConcepts Honda).

Behind the leading trio was Zach Osborne (Rockstar Energy Husqvarna) and Barcia, but all attention as set upon defending champion Webb after he crashed heavily in the final stages and was transferred to the Alpinestars Medical Unit.

A final three thriller saw an improved Osborne take the holeshot, before Anderson took his turn at the front for a number of laps until a determined Tomac sliced his way to the front with just minutes remaining. He took the chequered flag by 3.932s.

Behind him, a late mistake in the whoops from Anderson handed Roczen second and Osborne P3. Barcia crossed the line fourth, with Anderson remounting to salvage fifth. Overall, Tomac topped the Triple Crown tally from Roczen and Anderson.

Monster Energy Supercross will continue next Saturday, 29 February, in Atlanta, with Tomac’s advantage in the point-standings now sitting at seven ahead of Roczen, with Webb remaining in third position.