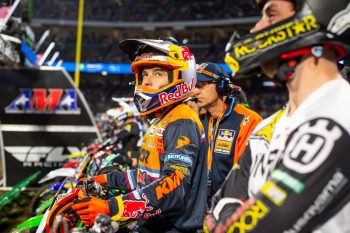 Current Monster Energy Supercross champion Cooper Webb has vowed that he’s ‘not quite done yet’ after escaping any serious injuries in a scary crash at Arlington.

After finishing second in the first of three Triple Crown finals, Red Bull KTM’s Webb was ejected following a mistake on the dragon’s back section.

Webb was immediately attended to by the Alpinestars Medical Team and transported to hospital for further examinations, revealing that he suffered hematomas to his pelvis and sacrum after being slammed onto his back trackside.

“Sometimes you ride the bull, sometimes you get the horns,” Webb stated. “Just left medical examinations and I got very lucky with just a hematoma to my pelvis, as well as my sacrum – extremely lucky and blessed to only walk away with that. Thanks everyone for the support and prayers. Not quite done yet.”

A 12th-place finish overall despite not finishing final two and being a non-starter in final three has kept Webb in 450SX contention, remaining third overall, now 26 points in arrears of Eli Tomac (Monster Energy Kawasaki).