Defending 250SX East champion Chase Sexton stood atop the podium tonight in Arlington’s Triple Crown round to draw level in the 2020 championship standings.

Hampshire won the opening final of the night, leading the early laps, being passed by Sexton and then taking him down as he countered for position. It wasn’t enough to deter the number one plate-holder.

From there Hampshire would go on to win by 3.245s over Sexton and McElrath, who rebounded from a slow start for third. Jordon Smith (Monster Energy Pro Circuit Kawasaki) and Jeremy Martin (Geico Honda) filled the top five.

In final two it was an easy win for Sexton, 9.252s over McElrath, who made his way by rookie Joey Crown (Yamaha) in the latter stages. Martin and Garrett Marchbanks (Monster Energy Pro Circuit Kawasaki) also made late moves on Crown.

McElrath managed to get out front early in final three and won by 4.214s, but the runner-up was enough for Sexton to seal the overall. Third was strong for Hampshire, salvaging a round podium, followed by Martin and Marchbanks.

The Triple Crown round belonged to Sexton, just one marker clear of red plate-holder McElrath with Hampshire completing the podium. In the standings it’s McElrath and Sexton tied entering Atlanta next Saturday, 29 February. 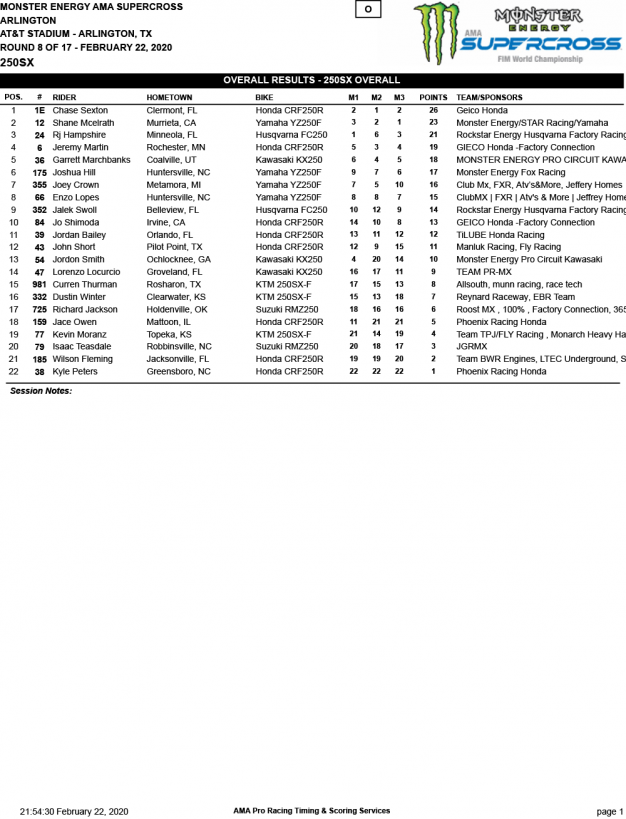