Six factors that are making for an unmissable 2020 season.

Seven rounds into the 2020 Monster Energy Supercross season, the 450SX championship remains wide-open with four different winners so far. As the mid-season approaches, the story is beginning to unfold and MotoOnline.com has been intrigued every step of the way. 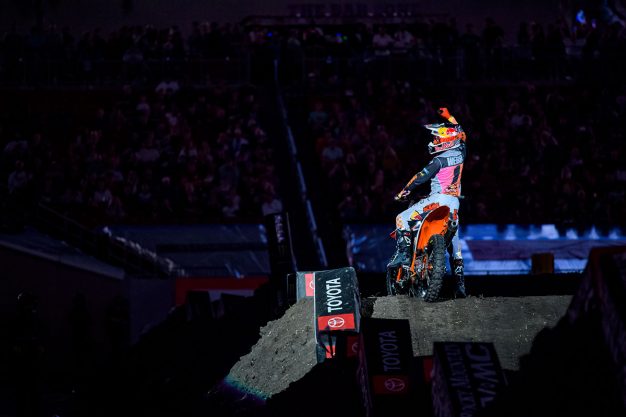 6. Best of ‘the rest’:
At this point of the year we’ve witnessed four different winners in Justin Barcia (Monster Energy Yamaha), Ken Roczen (Team Honda HRC), Eli Tomac (Monster Energy Kawasaki) and Cooper Webb (Red Bull KTM), plus dominant qualifier Adam Cianciarulo (Monster Energy Kawasaki) has been consistently in the mix. That leaves us with a ‘best of the rest’ scenario, which right now belongs to Jason Anderson (Rockstar Energy Husqvarna) ranked sixth in the standings. While the MotoConcepts duo of Malcolm Stewart and Justin Hill have shown glimpses of speed, the other rider to watch would have to be Blake Baggett (Rocky Mountain KTM WPS), plus Justin Brayton (Team Honda HRC) has potential to shine if he can improve track position early.

5. Tickle watch:
Tampa finally saw the return of Broc Tickle to Supercross and he found himself straight back into a factory deal with JGRMX Yoshimura Suzuki following two years out. He was reasonably competitive immediately and finished around where we’d expect in 12th, so the next target would be a top 10 and who knows what he can achieve from there. The fact is that either way if he is to revitalise his career he will require a string of good results through the final half of this season.

4. The Triple Crown effect:
If Glendale is anything to go by, Team Honda HRC’s Ken Roczen is the rider to beat when the Triple Crown format is in play, but then again it’s Eli Tomac (Monster Energy Kawasaki) who has won more of these than anybody since they were introduced in 2018 – the year he was crowned winner of the Triple Crown overall. Outside of that, 2018 champion Jason Anderson (Rockstar Energy Husqvarna) won one on his way to the championship and last year’s Triple Crown victor Cooper Webb (Red Bull KTM) captured two victories. The three Triple Crown rounds this year are scheduled for Glendale, Arlington this weekend and then Las Vegas’ penultimate round. 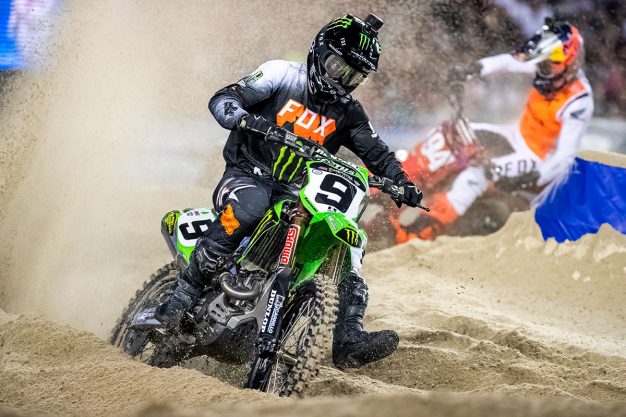 3. Webb’s title defence:
Currently within 11 points of the championship lead, reigning Monster Energy Supercross champion Cooper Webb (Red Bull KTM) is right there in the race for another 450SX title. With a win in San Diego and four additional podiums along the way, his only real troubles came with a 12th in St. Louis (aside from those finishes he was just shy of the podium with fourth in Glendale). The next few rounds will pain the picture on his chances through the back-part of season 2020.

2. When will AC win?:
Rookie star Adam Cianciarulo has stunned with seven-consecutive fastest qualifying times in seven attempts, but is yet to convert that afternoon pace to a main event win. The Monster Energy Kawasaki rider has been close on occasion and has made his share of minor mistakes along the way, but we’re tipping the win will come by round 12 in Detroit at the latest. So far, his best has been runner-up at both Anaheim 1 and San Diego with a lot of laps led in that time.

1. Tomac vs Roczen:
It’s appearing that this championship could in fact finally come down to either Eli Tomac or Ken Roczen. The only riders to win more than a single main event in 2020 so far (Tomac with three, Roczen with two), they’re each aiming for the first 450SX titles of their careers. Tomac seems to have the outright strength by now, although Roczen tends to rise to the occasion when he is in with a chance, which will make for an incredible series to follow. The spoiler? Jump back to point three and take a look just how close defending champion Cooper Webb (Red Bull KTM) is at this point in time – he’s dangerous!