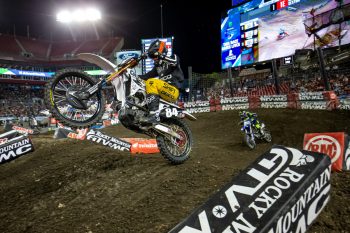 The youthful talent showed promising pace in qualifying, winding up seventh on the timesheets, while he charged to fifth in the second heat race of the night.

The 19-lap main event saw Shimoda position himself strongly early on, however he admittedly made a number of mistakes before the chequered flag, crossing the line in 10th.

“Yeah my day went pretty good until the night show,” said Shimoda. “I was seventh and sixth in for my timed practice sessions, but when the night show started I was riding so tight. I still was able to get through some sketchy moments, made some saves.

“In the main event I had good start running fifth for five laps, but I couldn’t find the best line through the sand section, which made me slower each lap. Went back to 12th with mistakes, no crashes, just small mistakes. I got better at the end, I passed two guys to get into 10th.”

Shimoda was one of two factory-backed rookies who made their debut in Florida, with rival Jalek Swoll (Rockstar Energy Husqvarna Factory Racing) failing to make it into the main event.