Position through the first turn 'huge' for new 450SX leader. 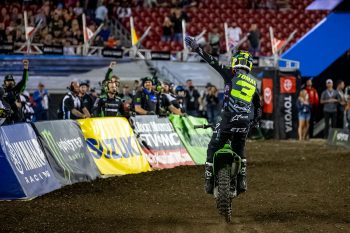 A top three start set new 450SX championship leader Eli Tomac up for victory in Tampa, signifying improvements out of the gates for the Monster Energy Kawasaki rider.

Tomac has endured mixed starts through the opening portion of 2020 Monster Energy Supercross, forcing him to fight through the field on most occasions this season.

However, gate selection at round seven enabled him to start inside the top three. He worked his way into the lead by lap 11 and was never headed, marking the 30th victory of his career.

“In practice I was still getting buried… it was driving me crazy because we do that practice start and I was still falling off the back,” Tomac explained when queried on his improved start on Saturday night.

“So, I just really picked a better gate, that’s what I felt like was different, got better traction and it was just so nice to come around in somewhat clean air rather than banging elbows into that first turn. That was huge for us to have that improvement.”

Tomac now leads the premier class standings by four points over former red plate-holder Ken Roczen (Team Honda HRC) as the series travels across to Arlington, Texas, this weekend for the eighth round.