Whiplash the cause of Baggett missing Tampa main event

Rocky Mountain KTM team confirms he will be fit for round eight. 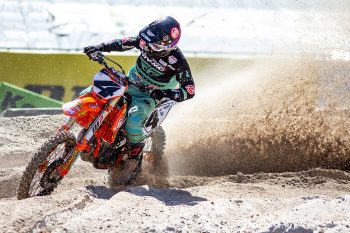 Severe whiplash was the reason behind Blake Baggett sitting out the main event in Tampa’s seventh round of 2020 Monster Energy Supercross, still on-track to return this weekend in Arlington.

The Rocky Mountain KTM WPS rider was involved in a heavy multi-bike incident during the opening lap of heat two on the night, but still managed to transfer directly with an eighth-place result.

Baggett suffered from whiplash following the incident and the severity of muscle spasms and pain in his neck led to the decision of missing the 450SX final. He has since been cleared of any bone, ligament or tendon damage.

“We here at team Rocky Mountain KTM WPS are very pleased to let everyone know that team rider Blake Baggett will 100 percent be lining up for this upcoming weekend’s race in Dallas,” a statement from the team confirmed.

“This news comes just a few days after Baggett and his team made a last-minute decision to pull out from the Tampa main event, based upon the rider’s health after very harsh crash on lap one of the heat race. Upon crashing with another rider, Baggett himself was hit hard by the bike of a third rider, resulting in a severe case of whiplash.

“He would remount and put on an absolutely amazing comeback ride, earning a transfer spot and closing within less than two seconds from the sixth-place of [Jason] Anderson. Unfortunately upon returning to the team hauler after the race, Baggett’s neck and upper back muscles began to spasm and lock up from the whiplash.

“Within a 20-minute period and roughly 15 minutes of the 450 main event gate-drop, the muscle spasms and pain had rapidly escalated to a point where Blake could not even hold his head up. After trying everything within the team and Blake’s power, the team made a final decision that it would be both impossible for him to complete the race and not worth the risk of furthering injury.”

Ahead of this Saturday’s Triple Crown in Texas, Baggett now sits 10th in the standings. He was credited a single point for qualifying and scoring 22nd position, despite not actually starting the main event.