Top three result despite missing all of last season with back injury. 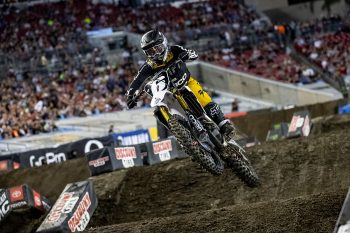 A podium result following over a year out of the sport came as a convincing return for Geico Honda’s Jeremy Martin at Tampa to open his 250SX East campaign.

Martin suffered a major back injury in mid-2018 during the outdoors that required multiple surgeries to mend, finally able to make his anticipated comeback on Saturday.

Qualifying quickest in the afternoon was a spectacular statement to make and then in the night show he was second in his heat race behind defending champion teammate Chase Sexton. A strong showing in the main event saw him capture third position.

“Wow, did it feel good to be back at the races lining up on my Geico Honda,” said Martin. “Felt pretty fast all day long in practice, but I didn’t expect to qualify P1.

“Come the night show I struggled a little bit in the heat race and main event with small race-craft mistakes, which led to arm-pump, so I did my best to manage my race coming home to third place.

“It’s fine, all those things will come, I haven’t raced in a situation like that with points on the line – racing for a championship – for a long time.

“A year ago, I was working at a dealership for a buddy of mine! I feel like this is my second chance at racing, so I’m happy to be here. Really excited about this 2020 east coast series and building off this first round.”

The weekend marked Martin’s third race back following his injury, also previously lining up aboard a CRF450R in the Monster Energy Cup last October and then the Paris Supercross in November.