Potential of Tickle evident in Supercross return with Suzuki 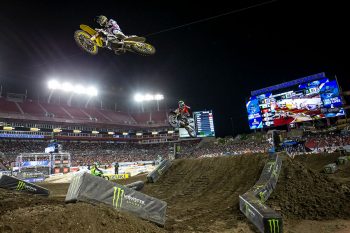 Tickle was finally able to compete again in round seven of the season following an extended period out due to an anti-doping violation, scoring fourth in his heat race and a respectable 12th in the 450SX final aboard the factory RM-Z450.

Early in the main event he was inside the top 10 and wound up 12th, which was an impressive way to join the field mid-season despite spending minimal time with Suzuki prior to the weekend. Much of his pre-season was spent preparing on Husqvarna machinery.

“My first race back in almost two years was filled with emotions,” he explained. “I’m very happy with how smooth and calm I stayed throughout the day. I felt like I haven’t missed a beat overall being away – I will improve each week as a racer and get more comfortable.

“I want to thank JGRMX Yoshimura Suzuki for all the hard work over the last three weeks preparing for Tampa. I’m looking forward to getting more quality riding and training in this week to show up to Dallas a step better than this round.”

JGRMX Yoshimura Suzuki team manager Jeremy Albrecht said it was a welcome return for Tickle, who joined the team at late notice since the injuries of Joey Savatgy and Fredrik Noren currently have them sidelined. Tickle will complete the season with the team.

“It was a good weekend,” said Albrecht. “We had a lot of excitement around Broc’s return to racing and he did great. It was impressive to see how fast he adapted to his RM-Z450 and he came out swinging. He had a great heat race, battling to finish fourth, and a strong main event ending in 12th. Broc had speed to be in the top 10, so that excites us for next week.”