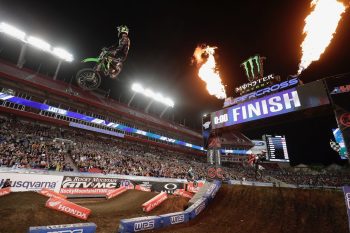 Round 7 of Monster Energy AMA Supercross, an FIM World Championship made its first trek east where Monster Energy® Kawasaki rider Eli Tomac captured his third 450SX win of the season and took control of the championship points lead.

Rookie Adam Cianciarulo kicked the day off by qualifying with the fastest lap time (47.704) with his teammate Eli Tomac hot on his heels in second, for the seventh week in a row. The duo were the only riders to break into the 47 second range on the Tampa layout.

As the gate dropped on 450SX Heat 1, Tomac nailed the holeshot and never looked back, crossing the finish line in first.

450SX Heat 2 saw the No. 9 of Cianciarulo grab the holeshot aboard his KX™450 and lead nearly every lap of the heat race, but a late race bobble would allow a fellow competitor to sneak by. Cianciarulo crossed the checkered flag in second place.

Similarly, to the heat race, Cianciarulo shot out front in the 450SX Main Event leading the 22-rider field. Cianciarulo led 10 of the 26 laps before his teammate would take over the lead. An unfortunate late race mistake in the whoops section sent Cianciarulo and his KX450 crashing to the ground. The mistake proved to be costly as the No. 9 rider was able to remount and cross the finish line in eighth place. Cianciarulo maintains his fifth-place position in the championship points chase.

Over the past few weeks Tomac has tirelessly worked on refining his starting technique, which paid dividends on Saturday night in Tampa. Nailing the start in the Main Event, Tomac settled into second place behind his teammate Cianciarulo. For the next several laps, Tomac would close the gap and begin hunting for places to make a pass for the lead. Tomac found that opportunity in the one section that separated riders all day long as he began to make the pass in the split-lane sand section and then sling shot his KX450 around the outside of the next corner completing the pass for the lead. Tomac went on to build a nine second lead over second place and go on to take the win.

Tomac’s dominant win in the sandy soil of Tampa earned him the highly coveted red plate backgrounds and a four-point lead in the 450SX championship point standings. The win marked Tomac’s 30th career 450SX win and became the fourth rider in history to win twice in Tampa.

“Today could not have gone much better. All day I felt comfortable on Monster Energy Kawasaki KX450 and it showed. Our starts tonight were as good as they have ever been, which put us in a good position right from the start of the race. I was able to follow Adam for the first part of the race and the difference maker for me and a lot of riders out there tonight was the sand section. It could either help you or hurt you depending on the lap or if there were lapped riders in the way. I was able to get through there cleanly one time to get past my teammate and from there I was able to ride my own race. It is always nice to have the points lead, but we will not settle for anything less than wins from this point forward.”

“Man, I wanted that 1-2 Kawasaki finish so bad. I felt great all day long and obviously with it being somewhat of a hometown race for me I wanted to put on a show for my friends and family. Finishing in eighth is tough pill to swallow because we had that podium finish in our hands. My team and I have already made a plan on how to clean up these errors and will be ready to get our sprint on next week in Dallas for the next Triple Crown event.”