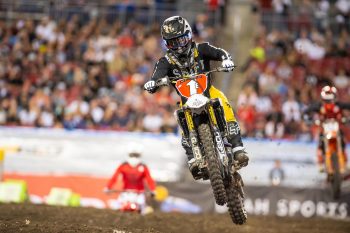 After a chaotic season in 250SX West, the GEICO Honda team needed a solid start for the 2020 AMA 250SX Eastern Regional Championship. The squad delivered at the opening round, held Saturday night at Raymond James Stadium in Tampa, Florida, with defending champion Chase Sexton bringing his number-one Honda CRF250R to a runner-up finish, and teammate Jeremy Martin right behind in third.

The day couldn’t have started much better for the team, with Martin collecting the fastest qualifying time, and then all three team riders briefly ran 1-2-3 in the second heat race of the night. Sexton led that race from start to finish with Martin second, while rookie teammate Jo Shimoda slotted into third. Shimoda ultimately took fifth in the heat, while Sexton and Martin finished 1-2.

In the main event, Sexton and Martin started third and fourth, then moved to second and third. Sexton passed his teammate Martin and held on to collect the runner-up honors behind race winner Shane McElrath.

“There’s obviously a weight to the number one plate, but to me it’s an honor that I dreamed about when I was little,” said Sexton, the 2019 250SX East Region Champion. “You just want to perform for the people that support you, and we made big strides this off season. Last year at the opener, I didn’t feel good at all. I didn’t have any race pace. I finished fifth. This year, the bike feels really good. I just want to leave my bike, focus on myself and my riding. Feeling a lot better going into Dallas (next week) than I did after the first round last year.”

A crash in June of 2018 nearly cost Martin his career, as a major back injury required multiple surgeries to mend. He missed the entire 2019 racing season, which made his return in 2020 an emotional and physical test.

“Wow did it feel good to be back at the races lining up on my GEICO Honda!” said Martin. “Felt pretty fast all day long in practice, but I didn’t expect to qualify P1.
Come the night show I struggled a little bit in the heat race and main event with small race craft mistakes which led to arm pump so I did my best to manage my race coming home to third place! It’s fine, all those things will come, I haven’t raced in a situation like that with points on the line, racing for a championship, for a long time. A year ago, I was working at a dealership for a buddy of mine! I feel like this is my second chance at racing so I’m happy to be here. Really excited about this 2020 east coast series and building off this first round!”

Shimoda made his professional supercross debut and showed good speed with the seventh fastest time in qualifying, and strong early run in his heat race. The rookie is known for his smooth, calculated riding, however, the nerves of racing inside a packed stadium for the first time took a toll. He ran as high as fifth in the main event before he tightened up and started making mistakes. He drifted as far back as 12th before recovering and taking tenth.

“Yeah my day went pretty good until the night show,” said Shimoda. “I was seventh and sixth in for my timed practice sessions, but when the night show started I was riding so tight! I still was able to get through some sketchy moments, made some saves. In the main event I had good start running fifth for five laps, but I couldn’t find the best line through the sand section, which made me slower each lap. Went back to 12th with mistakes, no crashes, just small mistakes. I got better at the end, I passed two guys to get into tenth.”

All three riders head to AT&T Stadium in Arlington, Texas, this coming Saturday.