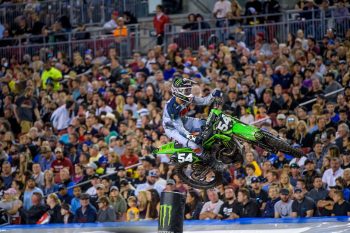 Monster Energy Pro Circuit Kawasaki’s Garrett Marchbanks and Jordon Smith were treated to a technical, hard-packed and sandy track to open their Eastern Regional 250SX season inside Raymond James Stadium with both riders emerging with top-five finishes. Marchbanks started the season with a fourth-place finish, while Jordon Smith ended up right behind his teammate in fifth.

Sophomore supercross rider Garrett Marchbanks had high expectations entering the 2020 season and was able to start off on a good note. He finished second in his heat race, giving him a good gate pick in the main event. Marchbanks didn’t get the start he was looking for and came around the first lap in 11th. It didn’t take him long to push to the front and was into fifth by Lap 5. He moved into fourth when his teammate had an issue and remained steady in that position until the checkered flag.

“I was really hoping for a podium this weekend, but I made things a bit hard on myself when I started outside the top 10,” said Marchbanks. “Starts are going to be crucial next week with the triple crown so we’ll look to work on those this week to come better prepared. Overall still a good night and glad to be in the top 10 on such a tough track.”

The track itself was oftentimes the biggest opponent for the riders in Tampa. Smith never gave up pushing back against its efforts to try and bring him down. He finished third behind his teammate in the heat race and got a great jump on the main event start, coming around the first lap in second. Smith was running well, but had a tip over in the sand section that pushed him back to fifth where he would eventually finish.

“This wasn’t exactly the finish I had in mind when we made our preparations for the start of the season, but I have to look at the positives and we are out of here healthy,” said Smith. “Sometimes that’s half the battle when you face a track that is tough. After so much time away from a race track, it’s great to be back and we plan to make the most out of the triple crown next weekend.”