Change at the top of 450SX standings as the series heads east. Monster Energy Kawasaki’s Eli Tomac has taken over the 2020 Monster Energy Supercross points-lead following a pivotal victory in round seven at Tampa.

At the beginning it was Adam Cianciarulo (Monster Energy Kawasaki) who led the way before Tomac made his move right before halfway. A few laps later, a costly crash saw Cianciarulo bumped from podium contention altogether.

That enabled Webb to climb into second position and Roczen eventually made his way to the podium despite a small crash of his own around the same time that Cianciarulo went down.

Fourth was a deserved result for Justin Barcia (Monster Energy Yamaha) after completing lap one in P14, while fifth came Justin Hill (Smartop Bullfrog Spas MotoConcepts Honda) in his best result of the year.

Cianciarulo finally crossed the line in ninth place, while Justin Brayton (Team Honda HRC) was 10th. Behind Zach Osborne (Rockstar Energy Husqvarna), Broc Tickle (JGRMX Yoshimura Suzuki) made his return to racing at the St. Jude round with a 12th-place effort.

Monster Energy Supercross now travels to Arlington in Texas for round eight of the 2020 season on Saturday, 22 February, with Tomac atop the standings, four points ahead of Roczen and with Webb a further seven behind in third. 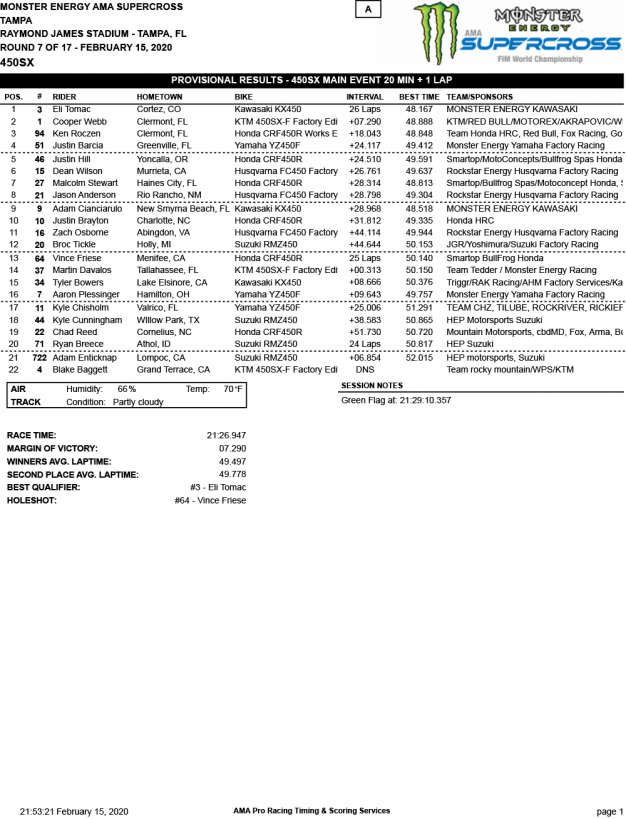