Supercross debut of Hunter Lawrence remains up in the air 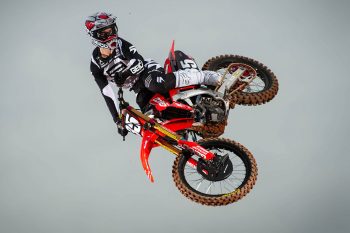 Highly-rated Geico Honda standout Hunter Lawrence is yet to determine if he will be fit to contest any rounds of 2020 Monster Energy Supercross, which will see the gates drop on 250SX East in Tampa this Saturday night.

Lawrence, 20, continues to recover from extensive shoulder injuries sustained in December and hasn’t yet been cleared to return to riding after undergoing surgery.

An incident while riding at the Honda test track in Southern California was the cause of Lawrence’s latest injury, which will likely delay his Supercross debut altogether for another season.

“What I did was, I tore my rotator cuff and labrum in my left shoulder,” Lawrence told MotoOnline.com. “I smashed the humerus in my shoulder as well, so I had surgery the day after Christmas and have been training every single day since then.

“We’ve invested a lot in physio and stuff away from the bike just to get back, try and make – if not round one – some of the rounds. We tried doing everything we could, but I had a doctor’s appointment and he said it’s looking great, but it’s a case of what if… They would love to see it have another three weeks just to heal.

“It’s really a three-month injury, but I’ve already been mountain-biking for the past three weeks and it feels solid, really good. I was ready to get back on the bike, but they don’t think the risk is worth it and the crew in my circle feels the same.”

Planning to get back on the bike outdoors and then assess his fitness next month will determine if Lawrence will be able to make any 250SX rounds before the end of the year. If there is only a limited amount of rounds remaining once he’s ready, instead expect a return to competition at Hangtown’s Lucas Oil Pro Motocross opener on 17 May.

“As of now we’re not 100 percent sure, because I’m not going to come back and race Supercross if I’m at 70 or 80 percent,” he explained. “It’d be great to get gate-drops, but at the same time I feel like I’m nothing less than a contender and a guy to go for a title at this point of my career. I don’t want to do anything less than that.

“My goal was originally Daytona, which wouldn’t be the smartest thing to do now that I haven’t been given the okay by doctors. There are too many variables with the unexpected when racing, so for sure, I’m bummed – I love Supercross with a passion and would love to be able to race it this year, but that’s not how it’s gone for me.”

If he isn’t able to make it back in time for the latter stages of the 250SX East series this season, Lawrence – who is now based in Florida – has indicated he will look to gain off-season experience amongst a series of international races prior to 2021.