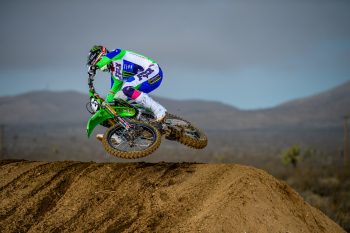 As Monster Energy Pro Circuit Kawasaki’s Austin Forkner and Cameron McAdoo have wrapped up their first six rounds, teammates Jordon Smith and Garrett Marchbanks are ready to step up for the first time in 2020 with the debut of the Eastern Regional 250SX class in Tampa, Florida.

The duo have been patiently waiting their turn to line up and prove their speed with Marchbanks returning for his second supercross season and Smith making his Monster Energy Pro Circuit Kawasaki debut. While Marchbanks will be lining up for his first east coast campaign, Smith is no stranger to battling on the dirt of the east. He’s won or been on the podium 12 times and is ready to get off to an impressive start.

Raymond James Stadium returns to the schedule after a one-year hiatus, but will also feature the St. Jude fundraising campaign “This Race Saves Lives.” Following the race, various items from the Tampa event – gear, plastics, and more – will be put up for auction to support the hospital.

“Both Jordon and Garrett have been ready for quite some time to do battle and they finally get to line up this weekend in Tampa to show what they’ve got. The rest of the team, we’re excited to get to the different type of dirt and see how our preparation will do.” – Zach White, R&D Manager