Timely 250SX West break a chance for McAdoo to reset 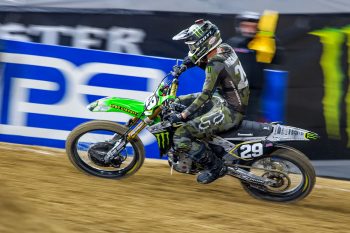 McAdoo finished sixth on debut with Kawasaki at Anaheim 1, but has since been unable to repeat that type of result prior to the mid-season layoff.

An incident in St. Louis sidelined him for three rounds with a lung injury, finally returning for Oakland and finished 14th despite winning his heat race.

While being in fifth position, McAdoo’s night at Petco Park came to a halt on lap eight when his KX250 expired. He sits 20th in the standings, eager to reset over the coming weeks off.

“It’s a bummer that I wasn’t able to see if I would have been able to get inside the top 10 tonight, but things happen,” he recalled. “Things like tonight just happen sometimes in racing – it’s out of anyone’s control and you just have to roll with the punches.

“If anyone is looking forward to the break, it’s me. I’m ready to get back to 100 percent so I can prove that I am able to run up front with my teammate and those guys. I’ve had a lot of positives that will keep me motivated in the off-weeks.”

The military appreciation round marked a special occasion for McAdoo in particular, joined by sister Petty Officer First Class Mackenzie Poskevich, who serves in the U.S. Navy was able to attend the weekend.