Training with reigning champion a boost for Baggett 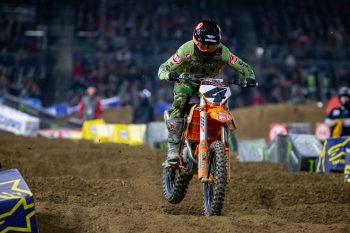 Blake Baggett has revealed training with reigning champion Cooper Webb (Red Bull KTM Factory Racing) in the lead up to San Diego played a role in landing his first podium of the season.

The Rocky Mountain ATV/MC KTM rider was highly-impressive at the sixth round of Monster Energy Supercross, claiming third in the second 450SX heat race before a brilliant performance in the 25-lap main saw him emerge in third position.

“I think the track was deteriorating fast [tonight], for sure – it was getting slicker every lap, and the holes in the whoops were getting worse,” Baggett commented. “I feel I had some spots where I was catching those guys a bit, and they were kind of playing cat and mouse, so that was allowing me to reel them in a bit.

“Then when I made a mistake, they’d gap back out. It was one of those nights where I left a little bit out there in some areas, but at the same time, I’ve been pretty far away from having a podium.

“I’m just happy to be up here, and a big thanks to KTM for letting me ride with them this week – I got to ride with Cooper and that’s helped a lot.”

Baggett has shifted to seventh in the standings ahead round seven of Supercross this weekend at Tampa in Florida.