Factory Kawasaki rider returns to form at the sixth round of Supercross. 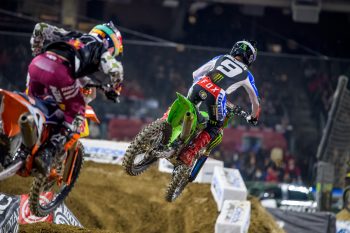 Adam Cianciarulo says his battle with Cooper Webb (Red Bull KTM Factory Racing) at the San Diego Monster Energy Supercross brought back memories of their rivalry in amateurs, the premier class rookie ultimately finishing runner-up at the sixth round.

The Monster Energy Kawasaki entry returned to impressive form at the Californian round, claiming victory in his heat race before controlling the field for 20 of the 25 laps in the main event.

He relinquished the lead to reigning champion Webb in the closing stages, however managed to hang on for this second podium of the season.

“Back in the day racing Cooper, obviously there were other guys, but when we went out there and raced each other, he was looking at me and I was looking at him,” Cianciarulo explained. “Now it’s funny that we were able to go 1-2 tonight. There are so many other people, you don’t really focus on one guy or you don’t really focus on any guy, but you know everyone is fast.

“It was cool that it came down to us tonight, and it kind of brought back some memories. It was super fun, and obviously I wish I would have won, but I didn’t deserve it.”

Cianciarulo sits fifth in the championship standings as the series heads East for the first time this year at Tampa in Florida.