Second in the points a strong position for Yamaha rider into the break. 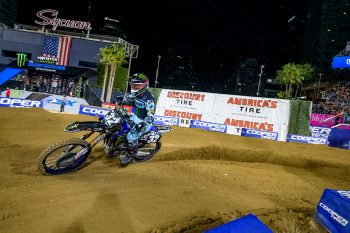 Recording consistent finishes will be instrumental for the 250SX West title contenders when the series resumes in Seattle, former points-leader Justin Cooper has indicated following his fifth podium in six rounds at San Diego.

Each of the top three in 250SX West – Ferrandis, Cooper and Austin Forkner (Monster Energy Pro Circuit Kawasaki) – have had throwaway results across the first part of the season, however, it’s defending champion Ferrandis who has taken control with three wins to date.

“I’ve learned that starts are key and that being consistent is what’s going to pay off in this championship,” Cooper commented. “We’ve all had bad nights and I was the last one to have it, so I felt like I had a good cushion and I kind of blew it when I shouldn’t have.

“There’s nothing I could have really done different – just mistakes on my part. I guess I’ve learned from them, but I felt like I rode good tonight, just a little bit off the pace and those guys kind of walked away from me.”

After scoring his first-career win at Anaheim 1, Cooper maintained the red plate through the opening five rounds until Ferrandis earned it back for San Diego. Whether he has it or not doesn’t affect his approach at this stage of the year.

“I’ve honestly had no pressure running the red plate for some reason,” he added. “It’s still early in the season and there’s still so much racing to go, even now. We still have the east/west shootouts to go through and there’s really been no pressure on me – I’ve just been going out and doing my best each time.

“I mean, I would like to have it still, it’s nice to have and I feel like I rode like I would if I didn’t have it. Red plate or not, I feel like I’m doing the best that I can each time I’m out, so that’s all that counts.”

As the Monster Energy Supercross season travels to Tampa this weekend for the opening round of 250SX East, Ferrandis leads the west by seven points over Cooper, with Forkner a further six points behind in third. Their battle will resume on 28 March.