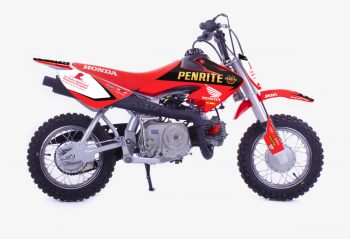 It’s important for children to dream and explore the curiosities, imaginations and self awareness, and it’s our responsibility to help inspire the next generation of riders. The Monster Energy Supercross Championship, riders and teams provide a visual spectacle kids aspire to be a part of.

2020 marks the beginning of a new dream for Yarrive Konsky, the owner of the Penrite Honda Racing Team and he can’t thank everyone in America enough for their acceptance and support.

“I grew up watching the AMA Supercross Championship. I wore my mum’s VCR out. I remember being so angry when the VCR chewed up my supercross tapes,” Konsky shared. “Originally I had two or three tapes that I borrowed from other riders, and I well and truly wore them out. I remember repairing the videos with sticky tape as I was obsessed with learning as much as I could from them.”

Konsky admits that racing in America was the dream, however, the real dream is to always chase what you love, and to work hard to achieve all you can be. The team has had amazing success with riders from all over the world, most recently with America’s Justin Brayton and Chris Blose.

“Americans Justin Brayton, Chris Blose and Mitchell Oldenburg rode for Penrite Honda in Australia last year. All three riders have children and the team’s Australian rider, Brett Metcalfe, has two sons. Family is everything in our program,” said Konsky.

Penrite Honda is still fully committed to racing in Australia; they are just striving to grow and want tomorrow’s championships to never settle that’s why they expanded.

“We would be a hypocrites if we didn’t try to grow our program and chase bigger goals and dreams. We have always preached that everything imaginable is possible if you work hard and through this new program we will be able to help riders from all over the world, especially Australia,” continued Konsky.

Konsky’s tenacity and passion comes from life lessons learnt from a young age that you can’t take life for granted.

“I played Australian Rules Football for many years. When I was 11, our team captain Russell, got leukaemia. When we visited him in hospital, he was bloated from all of the drugs they had given him. The next time I experienced that was with my best friend, Paul Broomfield, who lost his life to a serious form of Aplastic anemia, and last year I lost my uncle to cancer. It’s devastating to see what they go through and what their families endure. I want the children and their respective families to know they aren’t in this alone” concluded Konsky.

The St Jude Children’s Hospital is leading the way the world understands, treats and defeats childhood cancer and other life-threatening diseases, they have spent more than half a century finding cures and saving children. Their groundbreaking research has helped push the survival rate for childhood cancer from 20-percent in 1962 to more than 80-percent today.

Supercross, the riders, and Feld Entertainment support the St Jude Children’s Hospital’s foundation, and Penrite Honda feel it is important to show their support. Team owner Yarrive Konsky’s past experiences made it an easy decision, especially after the world’s best racers supported Australia during the country’s time in need.

Australia’s Luke Clout was overwhelmed by the support the industry in America showed Australia during their time in need and he hopes the team replica CRF50R helps in some small way.

“The way many of the best riders from around the world rallied behind the bushfire catastrophe we are experiencing in Australia made me proud to be a supercross racer. When I heard about the St Jude foundation and what they do, I couldn’t wait to be a part of it. My team is giving them a race replica CRF50R and Fly Racing is providing a full set of custom team gear and I want to give the recipient a free lesson” said Clout.

Penrite Oil, Honda Motorcycles, Fly Racing and the entire team are providing a race replica CRF50R, a set of FLY Racing gear and a day’s lesson with team rider Luke Clout. The team will have the Honda’s number one selling fun bike on display this weekend in San Diego.

Make sure you come out and support supercross this weekend and come by the team Penrite Honda Racing Transporter.