Penrite Honda Racing’s Mitchell Oldenburg is in doubt for San Diego’s sixth round of 250SX West on Saturday following a crash while practicing this week.

Oldenburg will make a decision tomorrow morning on whether he will be fit to line-up, hopeful of converting his speed into stronger results before the mid-season layoff.

“This week has been great, except for a small crash I had,” said Oldenburg. “The team has also done a great job in showing their appreciation for the military. 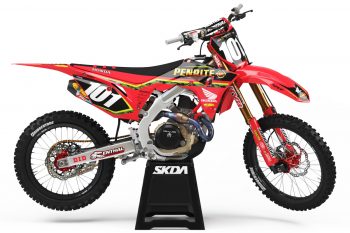 “Last week we showed as a team that we have the bikes and the speed to race up front.

“I know Luke [Clout] and I are capable to challenge for a position on the podium and that’s what we are chasing, I am just not 100 percent sure I will be racing.”

Australian-operated squad Penrite Honda has unveiled two military-inspired liveries in respect of those who’ve served for this weekend’s military appreciation round – including a special Fly Racing variant in the day program.